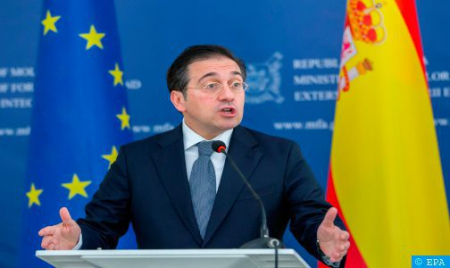 The position of the Spanish government in support of the autonomy initiative presented by Morocco to settle the Sahara issue is a “sovereign decision,” Spanish Minister for Foreign Affairs, European Union and Cooperation, José Manuel Albares, stated on Monday, By recognizing the autonomy initiative presented by Morocco as the “most serious, realistic and credible” basis for resolving the Sahara dispute, “Spain has taken a sovereign decision,” Albares said in an interview with private radio station “Onda Cero”. The position taken by the Spanish government “is in accordance with international legality and there is nothing to add on this subject,” he said, calling for avoiding “sterile polemics” on this issue. “I will not fuel sterile polemics. Our decision is sovereign and it is consistent with international legality,” Albares insisted, while referring to the untimely hostile reactions of the Algerian regime.