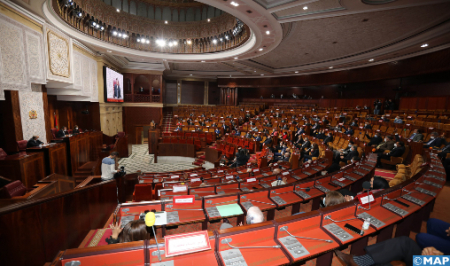 The House of Representatives (lower house) on Monday adopted, unanimously, the draft organic law 15-86 setting the conditions and procedures for the exception of a law’s unconstitutionality. resenting the bill, Justice Minister Abdellatif Ouahbi noted that the text is the result of efforts made according to a participatory approach, marked by the involvement of all actors in the legal and judicial fields, as well as experts in the field of constitutional and administrative justice in Morocco and elsewhere. The adoption of the participatory approach aims to achieve a version of the draft law ensuring a balance between the preservation of rights and freedoms guaranteed by the Constitution through the mechanism of the exception of unconstitutionality and the achievement of judicial efficiency by limiting in particular the appeals made in bad faith, in order to avoid any impediment to the normal course of an effective and efficient justice, explained the Minister. Recalling the various stages of the bill, Ouahbi stressed the importance of this text and the political debates it has generated, noting that it will be submitted to the Constitutional Court before its publication in the Official Bulletin, to be operational within a year. During the general debate of the bill, the governmental majority groups and the constitutional democratic social group indicated that this text has a clear impact on the consolidation of constitutional and legislative guarantees for the protection of rights and freedoms. It also stressed that its application is able to provide an environment for the capitalization of constitutional protection of rights and freedoms of citizens, as well as the strengthening of the circuits of individual access to constitutional justice. They have, in this sense, highlighted the attachment of the Kingdom to human rights and its commitment to the mechanisms of human rights and international human law, believing that the continuation of the legislative procedure of this bill is able to strengthen this process. This text establishes a fluid and flexible system when applying the procedure of exception of unconstitutionality of a law, added the groups, considering that the new version is more precise, clearer and includes a set of important provisions. For their part, the opposition groups stressed that the debate on the organic law 15-86 is a distinguished moment in the consolidation of fundamental reforms and the process of democratic construction stipulated by the Constitution of 2011, in consecration of the rule of law. In this respect, they considered that the challenges and aspirations that Morocco aims to achieve in the framework of its democratic model, require a comprehensive legislative system, in order to continue the achievements of the Kingdom in the field of rights and freedoms. They further noted that the text is of major importance and constitutes a qualitative leap for the mechanism of prior review of the constitutionality of laws, welcoming the efforts to revise all provisions rejected by the Constitutional Court.