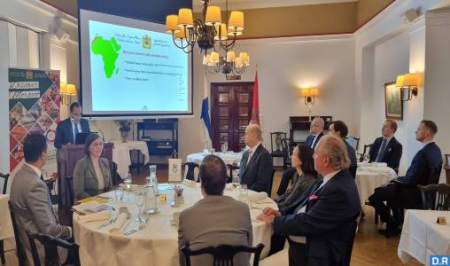 Morocco and Finland shared their experience in preventing and fighting extremism, part of a panel discussion held, on Wednesday in Helsinki, under the theme: “Addressing the experiences of Morocco and Finland in the fight against terrorism.” The event, hosted by Morocco’s embassy in Helsinki, was aimed at exploring the possible interactions between two different approaches evolving in a profoundly changing global economic and security context. “Terrorism is a global phenomenon. To combat it effectively international cooperation is necessary, including with the Kingdom of Morocco,” said Paivi Kairamo, Ambassador for Cooperation against Terrorism at the Finnish Ministry of Foreign Affairs. Stressing the importance that his country gives to “effective multilateral cooperation” in this area, the Finnish official commanded “Morocco’s commitment and its action at the level of international organizations where its role is well known and recognized.” Speaking about the Kingdom’s strategy to prevent terrorism and fight against extremism, Morocco’s ambassador to Finland, Mohamed Achgalou, said that thanks to the impact of the Kingdom’s multidimensional strategy, “the national territory across its borders is completely safe, secure, stable and ready to welcome Finnish investors and tourists at any time.” In this favorable context, the Moroccan diplomat highlighted “the visionary policy of HM King Mohammed VI that has turned Morocco into a haven of peace and stability that extends beyond the national territory to be a major asset for regional and European security. Addressing an audience of businessmen, experts and senior Finnish officials, the Moroccan diplomat outlined the major pillars of the national policy of prevention and fight against terrorism and its importance to “secure and, at the same time, preserve and improve the economic and tourist attractiveness of the country. “While total security was at the heart of the conventional conception of the fight against terrorism in neighboring countries, Morocco’s choices for the implementation of its multidimensional strategy have always been made in compliance with the principles of good governance and the rule of law,” he explained. That is why, “the Moroccan approach mobilizing a collective effort, public authorities, civil society and citizens, has not ceased since its inception to adapt and confirm its relevance in a particularly turbulent regional environment.” Regarding cooperation, the main subject of this meeting, Achgalou highlighted the unwavering commitment of the Moroccan authorities to fruitful partnerships that have prevented many tragedies in the world thanks to the vigilance and professionalism of various security services of the Kingdom. According to him, this commitment continues and is reflected in the total mobilization against terrorism, extremism and organized crime. “These are transnational, interconnected and unpredictable phenomena that involve dangerous alliances among separatist groups who are sheltered and fostered by some states in our region”. “These very same actors stubbornly refuse to cooperate and therefore threaten regional and international security,” he warned. The South-South dimension of Morocco’s international commitment is illustrated, according to the Moroccan ambassador, in the creation, in 2015, of the Mohammed VI Foundation of African Ulemas, which is consistent with the Moroccan constants in terms of faith and doctrine, values that Morocco promotes to counter religious extremism in Africa. Citing, moreover, the example of the Office of the United Nations Program for Counter-Terrorism and Training in Africa (UNOCT) whose headquarters have been entrusted to Morocco in 2021, Achgalou stressed that “through this strategic decision, the community of Nations recognizes Morocco’s international role in the fight against terrorism and reinforces, thus, several other joint initiatives such as the Global Counter-Terrorism Forum (GCTF) or the International Coalition against Daesh. Turning to the religious dimension, the diplomat stressed that “the Commandery of the Faithful guarantees the preservation of spiritual peace to citizens, which is missing in many other countries.” It is “a fundamental feature of the Moroccan national identity because it preserves the constants of an open Islam practiced in a society that is tolerant by nature and protective, by humanism, of the free practice of religions,” he added. This meeting, moderated by Finnish analyst and writer Ari Petajavaara, was attended by Moroccan expert Naoufal Abboud, Executive Director of the “Nordic Center for Conflict Transformation” who addressed, the topic from the perspective of the economic impact and the financial cost of policies to fight against terrorism. He emphasized the specificities and strengths of the Moroccan experience as well as the lessons learned from the tragic events that have shaken the world.