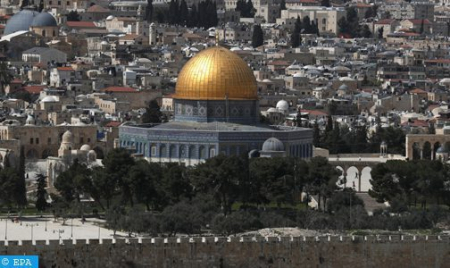 The Kingdom of Bahrain stressed, on Tuesday, the major role played by the Al Quds Committee, under the leadership of His Majesty King Mohammed VI, in defending the Palestinian cause and preserving the legal and historical status of the city of Al Quds. During a Security Council meeting on the situation in the Middle East, including the Palestinian question, the Permanent Representative of Bahrain to the United Nations in New York, Jamal Faris Al-Ruwaie, emphasized the important role of the Al Quds Committee, chaired by His Majesty King Mohammed VI, calling in this regard for the respect of the Hashemite custodianship assumed by His Majesty King Abdullah II of Jordan over the holy sites of Al-Quds Al-Sharif. The diplomat said that his country is keen to develop cooperation with brotherly and friendly countries in order to consolidate the foundations of peace and stability in the Middle East and promote the values of dialogue, coexistence, tolerance between peoples. He also stressed that the existing challenges and current regional and international developments require further strengthening joint efforts to establish the foundations of security, peace and stability, fight against terrorism in all forms and prevent its financing. The diplomat also stressed the need to establish joint development cooperation in order to contribute to the prosperity of the countries and peoples of the region and the world and to achieve their aspirations for security, peace and growth. Al-Ruwaie also referred to Bahrain’s firm stance in support of the rights of the brotherly Palestinian people, in accordance with the resolutions of international legitimacy. Bahrain calls on the international community to shoulder its responsibilities by opening up serious prospects for a just and comprehensive peace process based on the principle of the two-state solution and the Arab Peace Initiative, he said.