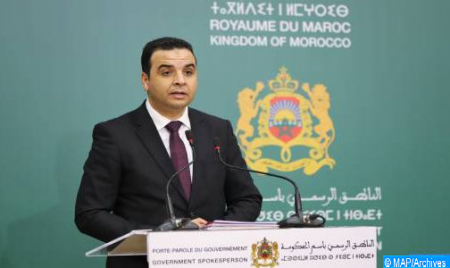 Morocco and Spain are steadily moving towards the implementation of all the elements contained in the joint statement, adopted during Spanish Government President’s visit to Morocco, said Government Spokesperson Mustapha Baitas on Thursday. During a press briefing at the end of the government council’s weekly meeting, held under the chairmanship of Head of Government Aziz Akhannouch, Baitas said that Moroccan-Spanish relations are progressing serenely since the adoption of the joint statement, on the way to the implementation of all the provisions set out in this statement within the deadlines set. The Minister noted that the energy sector is one of the main axes of the strategic partnership between the two countries, stressing the determination of Morocco to access the market for processing liquefied natural gas, the Kingdom has already issued calls for expressions of interest in this regard. The government is working to ensure the supply of natural gas to Morocco, according to a vision that aims to protect the Kingdom from any new jolt on the international energy markets, he noted. The joint statement, adopted at the end of discussions between His Majesty King Mohammed VI and Spanish Government President Pedro Sánchez, who visited the Kingdom on April 7, announced the opening of a new page in relations between the two countries. According to this statement, this new step responds to the call of His Majesty King Mohammed VI, to “inaugurate a new stage in relations between the two countries”, and His Majesty King Felipe VI to “walk together to materialize this new relationship”. It also corresponds to the desire of Pedro Sánchez to “build a relationship on more solid foundations.”