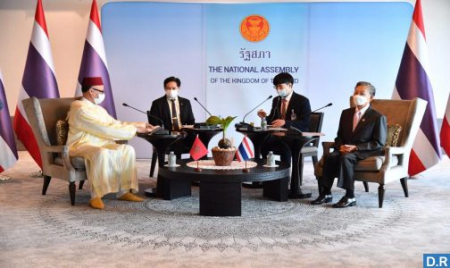 The means to strengthen political dialogue and cooperation between the Moroccan parliament and the National Assembly of Thailand were the focus of talks held Tuesday by the Moroccan ambassador to Thailand, Abderrahim Rahhaly, with president of the legislative institution of this Asian country, Chuan Leekpai. During this meeting, Leekpai, also president of the House of Representatives of Thailand, praised the quality of relations between Morocco and Thailand, highlighting the similarities between the legislative institutions of the two countries, especially with regard to the bicameral system. Recalling the successful visit of the speaker of the House of Representatives of Morocco in August 2019 in Bangkok, Chuan Leekpai welcomed the obtaining by Morocco of the status of Observer to the ASEAN Inter-Parliamentary Assembly (AIPA). He considered, in this sense, that the obtaining of the said Status by the Moroccan House of Representatives reflects the visionary strategy of the Kingdom in its relations with the countries of the region, expressing its readiness to accompany and support any initiative aimed at expanding the actions of parliamentary cooperation between the two Kingdoms. For his part, Rahhaly welcomed the common will to give a new impetus to the political dialogue between the two countries while expressing the wish that this dialogue be established on a regular basis between the House of Representatives and the National Assembly of Thailand in view of the political similarities that plead in favor of an enterprising and multifaceted inter-parliamentary cooperation between the two countries. Praising the election, last February, of the members of the Executive Committee of the Thailand-Morocco Parliamentary Friendship Group in the National Assembly, the diplomat agreed with Leekpai to make full use of this platform to diversify the actions of parliamentary diplomacy between legislative institutions through the exploration of new areas and the launch of new initiatives.