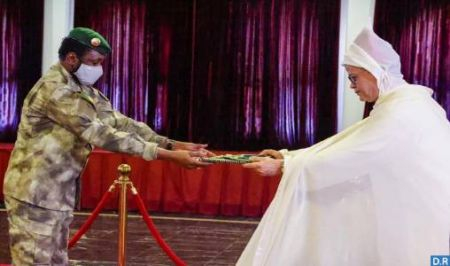 Morocco’s ambassador to the Republic of Mali, Driss Isbayene, on Thursday handed over his credentials to the Transitional President, Colonel Assimi Goïta. During an official ceremony held at the presidential palace of Koulouba in Bamako, Isbayene conveyed to Colonel Assimi Goïta the greetings of HM King Mohammed VI and expressed the Sovereign’s will to strengthen and develop relations between the two countries in various fields. He also reaffirmed the Kingdom’s resolve to accompany Mali through the challenging circumstances that the country is experiencing to ensure its security and stability, voicing Morocco’s firm commitment to foster bilateral cooperation relations and boost them in various areas, in order to strengthen the bonds of friendship and meet the aspirations of both peoples. For his part, Colonel Assimi Goïta expressed his will to strengthen the historical relations of friendship and cooperation linking the two countries, expressing satisfaction at the Kingdom’s support to his country in the circumstances it is going through. The transitional President of Mali commended the level of cooperation between the two countries, which culminated with the recent inauguration of the Mohammed VI Perinatal Clinic in Bamako, one of the main medical and social centers that were built and equipped at the initiative of His Majesty King Mohammed VI. The ceremony took place in the presence of Mali’s Foreign Minister Abdoulaye Diop, members of the government, and advisors to the transitional President.