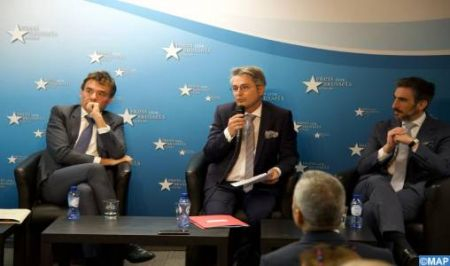 Belgian figures from various backgrounds have launched in Brussels a platform of support for the Moroccan autonomy plan for the Sahara. The “Belgian Committee to support autonomy for the Sahara region” (French acronym COBESA) was presented on Thursday to Belgian, European and international press at the Press Club Brussels Europe, in the presence of diplomats, politicians, MPs, experts, scholars and economic, political and civil society stakeholders of the Moroccan community. This initiative aims to support the UN-led process to achieve a political solution to the conflict over the Sahara in a strategic region for Belgium and Europe, to bring a message of peace. For Belgian MP and COBESA President Hugues Bayet, the Sahara issue cannot remain unresolved, in the sense that the region deserves a peaceful solution and the serenity that brings hope for a better future for its inhabitants. “This is key if we want to move forward with a peaceful solution to let the populations of the Sahara live in peace while ensuring a real autonomy of functioning as proposed by Morocco,” he said. “It is no coincidence that the United States, France, Germany and Spain have decided to take a position in favor of a settlement of the situation at the UN based on the Moroccan autonomy plan,” the MP added. These countries believe that the Moroccan autonomy initiative is the most serious, credible and realistic basis for resolving the dispute, he went on, stressing that the UN Security Council has established several times the pre-eminence of the Moroccan autonomy proposal, including in October 2021 “If there is an organization that has this objective of peace, it is the UN. We cannot accuse the institution of pretending to have economic or geopolitical interests,” he insisted. Stressing that the stability and security of this region are more than ever a vital issue for local populations but also for the Mediterranean and European environment, the president of COBESA underlined that the newly formed group believes that Belgium “cannot remain in the background and has a role to play.” “Our culture of compromise and our place in Europe plead in favor of a greater role in the quest for a peaceful compromise that would establish the true autonomy that the local populations have long deserved to enjoy,” he said. In similar remarks, Lawyer and professor of international law Patrick Saerens said that after the EU countries have taken the lead and decided to move the lines, Belgium, with its historical and political ties with Morocco, is called upon to join this momentum. “We will work within the COBESA to get Belgian officials to join the momentum generated by the Moroccan autonomy plan”, he stated, calling on them to seize the window of opportunity and back the Moroccan solution. In his opinion, “the international and local context has never been so favorable to contribute to finding a solution of peace.” This committee is motivated by the desire to break the deadlock and reach a lasting solution of peace, based on the Moroccan autonomy proposal, Belgian lawyer Yohan Benizri said. According to him, Belgium cannot remain indifferent to the solution proposed by Morocco. Reviewing the main lines of the Moroccan autonomy solution for the settlement of the Sahara issue, Morocco’s ambassador to Belgium and Luxembourg, Mohamed Ameur, recalled that all Security Council resolutions have enshrined the pre-eminence of Morocco’s autonomy proposal since it was proposed in 2007, confirmed its seriousness and recognized its credibility. By presenting this initiative for the negotiation of an autonomy status for the Sahara region, Morocco is part of a positive and constructive dynamic to end the current stalemate and progress towards a political solution of compromise,” he said. The autonomy plan is a “win-win” solution that is a realistic and programmatic way to end this dispute in line with the UN Security Council guidelines, Ameur said. In its substance, the autonomy plan is consistent with international law and the UN Charter while complying fully in essence with the right to self-determination and the Security Council’s resolutions on this issue, the diplomat explained. Negotiated autonomy has allowed resolving several conflict situations in the world regarding the respect for the territorial integrity of States and the specific characteristics of the regions concerned, he added. The autonomy solution is the most modern and democratic form of self-determination, Ameur went on. According to its initiators, the COBESA plans to raise awareness and mobilize political circles, economic stakeholders and the civil society for massive support for autonomy under Moroccan sovereignty, away from dogmatic and ideological approaches which are at odds with the historical, legal, social and political realities of the Sahara issue. This is particularly true as recent international news have shown a growing interest in finding a realistic political compromise-based solution for the Sahara region under the aegis of the United Nations.