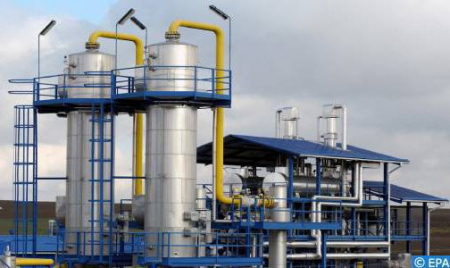 The importance of the Nigeria-Morocco gas pipeline project lies in the fact that it is the main route for large-scale, cross-border development and integration, according to the President of the Atlas Center for the Analysis of Political and Institutional Indicators, Mohamed Bouden. It is also a strategic-Atlantic project aimed at improving the energy security of African and European countries, as well as a crossroads for the energy interests of several international stakeholders, the political scientist wrote in an article published on the Senegalese portal “reveildakar.info.” “Rather than shortening distances, the logical vision of the project was to create a development route and improve the lives of nearly 400 million people,” he noted. The two countries could have envisioned a gas pipeline project that would run from Nigeria to Morocco and go through only three countries (Niger, Mali and Mauritania), or four (Benin, Burkina, Mali and Mauritania). Instead, the Moroccan-Nigerian vision for the pipeline took into account security and stability factors and opportunities for integration and sustainable development in West Africa for 11 countries, the expert said. Recent international developments have put a strategic focus on energy sources and have contributed to the consolidation of the strategic, economic and geopolitical importance of the Nigeria-Morocco gas pipeline project, which is the fruit of the common will of two leading countries in the African continent reflected during the visit of His Majesty King Mohammed VI to Nigeria in 2016 and His talks with Nigerian President Muhammadu Buhari, he added. In Bouden’s opinion, the economic benefits of the Nigeria-Morocco gas pipeline project are reflected, for Morocco, in stronger and more diverse choices and alternatives in the energy market, while for Nigeria, this giant project will significantly improve the country’s GDP. The countries through which the pipeline will pass will be able to produce enough electricity for domestic consumption, manufacturing activities, agricultural production, create job opportunities and improve the living conditions of the people, he noted. In a more global framework, the project could accelerate the implementation of the vision of the Tangier-Lagos Trans-African Highway and will also improve opportunities to address the causes of irregular migration from the countries of origin and help reduce pollution, stimulate clean industry and promote security and stability. There is no doubt that the project will give a new impetus to Morocco on the African continent on economic, political and developmental levels, and will strengthen its position as a leading African country in investment in Africa, Bouden explained.  The strategic position of Morocco gives access to many important regional and continental stakeholders and outside the African continent as the Nigeria-Morocco gas pipeline project represents a strategic vision whose ambition exceeds 5,660 km to the north. On the geopolitical level, the voice of Morocco and Nigeria is heard by the various international players who speak the language of energy to support this future project, the political scientist said. In terms of partnerships and investors, Bouden said that the project certainly needs international partners from the public and private sectors, as it represents a long-term partnership and a framework for collective action to accelerate economic growth.