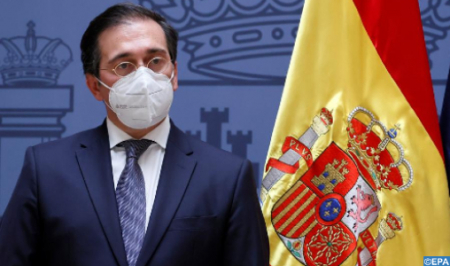 Spanish Foreign Minister José Manuel Barroso voiced, Monday, his country’s satisfaction with the pace of implementation of the roadmap established with Morocco. The implementation of the roadmap developed during April’s visit to Morocco of the President of the Spanish government, Pedro Sanchez, at the invitation of HM King Mohammed VI, “is advancing at a steady pace and in full normality,” Albares told a joint press briefing with his Portuguese counterpart, Joao Gomes Cravinho. Sea and air links between the two countries “have been completely restored” and last week, meetings were held in Rabat to prepare for the “Marhaba” operation and to examine the management of migratory flows, he stated. In his opinion, the reinforcement of migratory cooperation “can be seen on the ground with the strong declines” mainly on the Atlantic coast, where arrivals to the Canary Islands have decreased by 45%.  “We want to do things gradually. In an orderly manner and steadily. But also without rush,” Spain’s top diplomat said, noting that the various working groups will continue to hold meetings. “I am satisfied with the pace at which the work and coordination of these groups are developing,” Albares concluded.