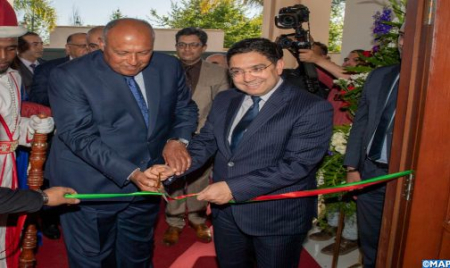 The new headquarters of the embassy of the Arab Republic of Egypt in Morocco was inaugurated on Monday in Rabat, during a ceremony chaired by the Egyptian Foreign Minister, Sameh Choukri, and the Moroccan minister of Foreign Affairs, African Cooperation and Moroccans Abroad, Nasser Bourita. Speaking at the ceremony, Mr. Choukri said that the inauguration of this new diplomatic building shows the solidity and depth of the fraternal relations between the two countries, which are bound by a common destiny and common objectives, noting that this event reflects the will of the two Heads of State to further develop bilateral relations. He also reiterated the determination of the two countries to further promote their bilateral relations to meet the aspirations of the two brotherly peoples and serve their interests. Mr. Choukri expressed his thanks to the Moroccan authorities that facilitated the procedures related to the construction and the inauguration of this building, which will provide support to the Egyptian community established in Morocco. For his part, Mr. Bourita said that the inauguration of this new headquarters also reflects the weight of the Arab Republic of Egypt at the Arab, African and international levels, as well as the depth of the relations of brotherhood and friendship binding the two countries. This embassy is an important mechanism for the development of these relations, in accordance with the vision of HM King Mohammed VI and President Abdel Fattah Al-Sisi to build strong and diversified relations and to promote permanent coordination and consultation between the two brotherly countries, said Mr. Bourita. Egypt and Morocco are bound by ties of sincere brotherhood and common history and driven by the strong determination to build an exemplary partnership preserving the interests of the two countries and the two peoples, the minister pointed out. This diplomatic building reflects the common will to make the embassies of the two countries a means for the development of bilateral relations, he underlined.