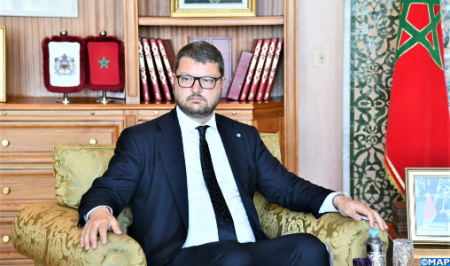 Cooperation with the Kingdom of Morocco is of paramount importance for the security and stability of the Euro-Mediterranean region, said Monday in Rabat the President of the Parliamentary Assembly of the Mediterranean (PAM), Gennaro Migliore. Speaking to the press following talks with the minister of Foreign Affairs, African Cooperation and Moroccans Abroad, Nasser Bourita, the PAM President stressed that cooperation with the Kingdom – a developed country in terms of economy, technology and knowledge – and with the countries of the Middle East and Asia, in general, is of paramount importance for the European and Euro-Mediterranean approach to security. In this regard, the official expressed the willingness of the Parliamentary Assembly of the Mediterranean to further strengthen its cooperation with Morocco on various issues of common interest. “We are facing new challenges and we are fully convinced that we can strengthen our future cooperation,” he pointed out. In a post-pandemic context and in light of the Russian-Ukrainian crisis, “we must strengthen our cooperation to face common challenges, but also to promote common opportunities”, he added.