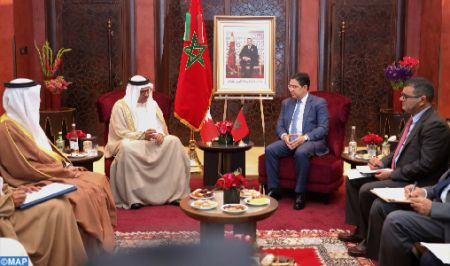 The Bahraini Minister of Foreign Affairs, Abdullatif Bin Rashid Al Zayani, has reiterated the position of his country supporting the Moroccanness of the Sahara. In a joint statement issued after his talks, Tuesday in Marrakech, with Minister of Foreign Affairs, African Cooperation and Moroccans Abroad, Nasser Bourita, the Bahraini minister stressed that the position of his country supporting the Moroccanness of the Sahara was crowned by the opening of a Consulate General of the Kingdom of Bahrain on December 14, 2020 in Laayoune in the Moroccan Sahara, on the decision of His Majesty King Hamad bin Isa bin Al Khalifa. This position supporting the Moroccanness of the Sahara continues in the framework of the UN and other regional and international organizations and fora, the same source added. In addition, this meeting was an opportunity for Bourita to reaffirm the constant position of the Kingdom of Morocco, under the leadership of HM King Mohammed VI, supporting the Kingdom of Bahrain by standing by its side to face any interference in its internal affairs and any attempt to undermine its security, stability and national unity.