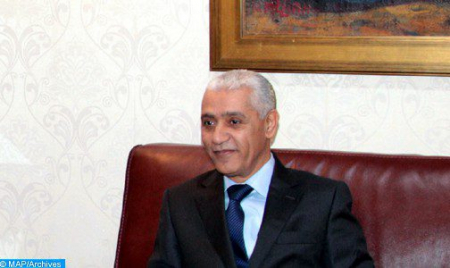 The role of parliamentary diplomacy and ways to strengthen cooperation between countries around the Mediterranean were the focus of a meeting, Monday in Rabat, between speaker of the House of Representatives, Rachid Talbi Alami, and president of the Parliamentary Assembly of the Mediterranean (PAM), Gennaro Migliore, who is on a working visit to Morocco leading a delegation of the organization. During this meeting, Migliore highlighted the importance of parliamentary diplomacy to address the challenges and strengthen cooperation between countries in the Mediterranean region in vital areas such as security, renewable energy, water, climate change among others, said a statement by the House of Representatives. Migliore said that the Kingdom of Morocco, by its geostrategic position and its political and diplomatic role at regional and international level, is considered a locomotive of integration between the two shores of the Mediterranean, and a key player in forming a prosperous Mediterranean area enjoying security, stability and development. For his part, Talbi Alami emphasized the role of Mediterranean parliaments to address the challenges facing the region, while reviewing the priorities that should be taken into account, including security, food and stability, through moving towards the green economy and addressing the real causes of migration. In this sense, Talbi El Alami called for strengthening consultations with the parliaments of the Sahel-Saharan States, intensifying coordination between the countries of the South, expressing the readiness of the House of Representatives to actively contribute to the success of initiatives undertaken by the PAM, to strengthen cooperation and solidarity between the various countries of the Mediterranean region.