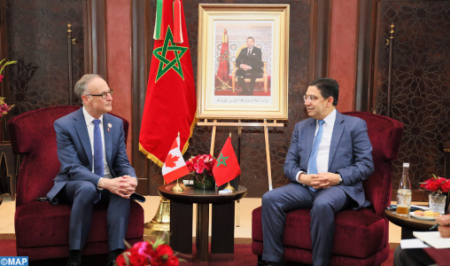 Minister of Foreign Affairs, African Cooperation and Moroccans Abroad, Nasser Bourita, held talks, Tuesday in Rabat, with Canada’s Parliamentary Secretary to the Minister of Foreign Affairs, Robert Oliphant. The talks, held in the wake of the celebration of the 60th anniversary of diplomatic relations between Morocco and Canada, focused on exploring ways to promote relations between the two countries for the benefit and prosperity of both peoples. They also focused on ways to combat security problems related to the fight against terrorism ahead of the First Ministerial Meeting of the Global Coalition against Daesh in Africa that will kick off on Wednesday. During these talks, the two parties reaffirmed their commitment to pursue joint efforts to promote peace in the world in light of the significant efforts made by the Kingdom in this regard. They also agreed to continue consultations to promote trade between the two countries, voicing their satisfaction with the convergence of views on many issues, such as the environment, the fight against terrorism and the protection of oceans.