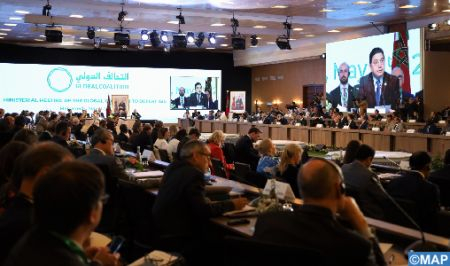 Minister of Foreign Affairs, African Cooperation and Moroccans abroad, Nasser Bourita, highlighted, Wednesday in Marrakech, the pernicious ties between terrorism and separatism, which are very often the “two sides of the same coin.”. “Separatism and terrorism are very often two sides of the same coin,” he said at the opening of the Ministerial Meeting of the Global Coalition to Defeat ISIS. “A worrying trend has been on the rise without garnering the necessary attention: the terrorism-separatism nexus,” the minister stated, stressing that “the collusion against the sovereignty and stability of states, and the convergence of financial, tactical and operational means, create an objective alliance between terrorist and separatist groups.” This has been confirmed by the increasing number of individuals crossing from separatist to terrorist groups and vice-versa, Bourita explained, adding that “those who finance, shelter, support and weaponize separatism, are actually contributing to spread terrorism and further compromise regional peace and security.” Let us not be mistaken: encouraging separatism is tantamount to complicity with terrorism,” he concluded. This first meeting of the Global Coalition to Defeat ISIS in Africa is being held at the joint invitation of the Minister of Foreign Affairs, African Cooperation and Moroccans Abroad and the head of U.S. diplomacy, Antony Blinken. The meeting, which sees the participation of representatives from more than 80 countries and international organizations, focuses on the challenges posed by terrorism in all its forms and the repositioning of Daesh in Africa. The meeting also reviews the actions undertaken in terms of stabilization efforts in areas previously impacted by Daesh, in the field of strategic communication against the radicalization propaganda of this terrorist group and its affiliates, as well as the fight against foreign terrorist fighters. The hosting by Morocco of this international event reflects the confidence enjoyed by the singular approach implemented by the Kingdom under the enlightened leadership of HM King Mohammed VI in the fight against terrorism. This meeting also confirms Morocco’s firm commitment to coordinate closely with its partners to root out the threat emanating from ISIS and thus fight against the sources of terrorism and extremism in the continent.