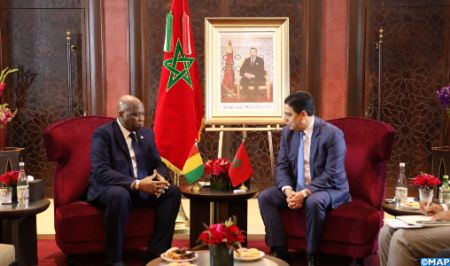 Guinea has reaffirmed, Tuesday in Marrakech, its constant position in support of the autonomy initiative proposed by Morocco for the resolution of the artificial dispute over the Moroccan Sahara. In a statement to the press following talks with Minister of Foreign Affairs, African Cooperation and Moroccans Abroad, Nasser Bourita, Guinea’s Foreign minister Morissanda Kouyate said that his country continues to see the autonomy plan proposed by Morocco as the most serious and credible basis for resolving the conflict over the Moroccan Sahara, welcoming Morocco’s “credible” efforts within the framework of the United Nations. “We clearly support the Moroccan autonomy plan,” the official stated, noting that his country is on the side of Morocco and the UN. “I want to make it clear once and for all, Guinea supports Morocco and its autonomy plan,” as well as all “its serious efforts,” Kouyate said on the sidelines of these talks held ahead of the First Ministerial Meeting of the Global Coalition against Daesh in Africa.