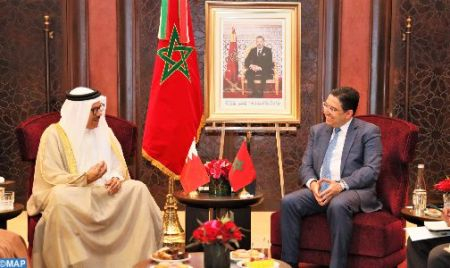 Minister of Foreign Affairs, African Cooperation and Moroccans Abroad, Nasser Bourita and his Bahraini counterpart, Abdullatif Bin Rashid Al Zayani, expressed their pride in the relations of cooperation and continuous solidarity between the two brotherly countries, thanks to the High solicitude of HM King Mohammed VI and His brother HM King Hamad bin Isa Al Khalifa, who are committed to continue their development and raise them to higher levels. A joint statement issued at the end of their talks, Tuesday in Marrakech, said that the two ministers reviewed the situation of bilateral relations and ways to develop them in order to raise them to higher levels, in accordance with the enlightened vision and the High Directions of the Sovereigns of both countries. In this sense, the two parties stressed the importance of holding, during this year, the 5th session of the Moroccan-Bahraini High Joint Commission under the sign of the transition to a qualitative cooperation stage, marked by the involvement of governmental institutions and fundamental investments, focused on strategic priority sectors and aiming at achievable projects with a tangible impact on the development process and a direct impact on progress and prosperity in the two brotherly countries. In this regard, the two ministers expressed their satisfaction with the level of ongoing preparations for the holding of the 5th session of the High Joint Commission, with the development of 11 cooperation agreements that are ready for signing and covering vital sectors, such as oil, gas, renewable energy, investment, social insurance, thus paving the way for governmental bodies and investment organizations to join, for the first time, the ongoing joint march to raise bilateral relations to higher levels. On the other hand, the two ministers stressed the need to activate the Joint Commission on Consular Affairs by holding its first meeting to contribute to the establishment of an objective diagnosis of the current state of affairs, and then the development of a comprehensive vision of an open and integrated consular and social cooperation, which takes into account the preservation and strengthening of social and human ties between the two brotherly peoples and ensures the right conditions to enable citizens of each of the two countries to contribute to the development march of the other country. They welcomed the existing legal frameworks adopted by the two countries and governing the entry, residence and work of citizens of both countries in the other country, in accordance with simplified laws and procedures. The two sides stressed the importance of continuing to implement the provisions of the “exchange of letters” on the approval by Bahrain, on April 27, 2004, of the request of the Kingdom of Morocco for visa exemption for entry into the Kingdom of Bahrain for diplomatic, special and service passports. In this regard, the two ministers said they were open to the possibility of developing the reference framework of this exemption through the conclusion of a memorandum of understanding between the Ministries of Foreign Affairs of the two countries, as a new framework that replaces the exchange of letters. They called for the examination of this issue and the exchange of views pending a decision on this matter at the appropriate time. They also expressed their deep satisfaction with the exchange of support between the two kingdoms regarding their candidacies for positions and membership in international and regional organizations, stressing the importance of continuing on this path in order to ensure a strong and active presence of the two brotherly countries in these organizations, and to serve both their national interests and those of the Arab region as a whole. In addition, the two ministers emphasized the need to implement the Memorandum of Understanding, signed on February 27, 2018, between the Moroccan Academy of Diplomatic Studies and the Mohammed bin Mubarak Al Khalifa Academy for Diplomatic Studies, through the implementation of its provisions especially with regard to the exchange of visits and participation in training sessions, courses and workshops organized by the two institutions.