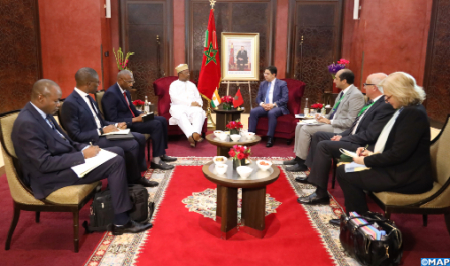 Niger wants to learn from Morocco’s experience in the fight against terrorism, Niger’s Foreign Minister Hassoumi Massaoudou said Tuesday in Marrakech. Morocco, which is preparing to host the first ministerial meeting of the global coalition against Daesh in Africa, has accumulated a rich experience in the fight against terrorism in the Sahel, from which Niger wishes to benefit, said Niger’s top diplomat following his talks with minister of Foreign Affairs, African Cooperation and Moroccans Abroad, Nasser Bourita. “Morocco understands well the problems of Africa, including terrorism which continues to plague several countries in the region, and that is why Niger wishes to take advantage of this unique experience”, he pointed out, adding that Morocco remains a leading country in the region and occupies a prominent place in the international fight against terrorism. “The prevailing security situation in the Sahel hinges on the commitment of a leading country like the Kingdom to strengthen the security of these countries and their support on the front line of this struggle,” said the Nigerien minister.