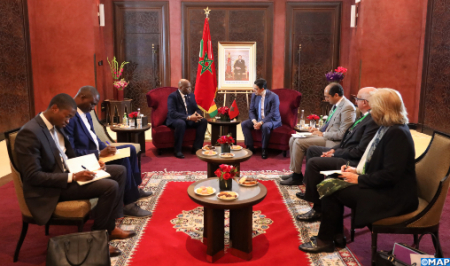 The distinguished relations of friendship and cooperation between Morocco and Guinea were highlighted during a meeting held Tuesday in Marrakech between Minister of Foreign Affairs, African Cooperation and Moroccans Abroad, Nasser Bourita, and the Minister of Foreign Affairs, Cooperation, African Integration and Guineans Abroad, Morissanda Kouyate. Speaking to reporters following these talks, the Guinean Foreign Minister recalled the depth of relations between the two countries, while welcoming the leading role played by Morocco in Guinea’s transition. “The president of the transition has instructed me to reiterate to His Majesty King Mohammed VI and to the Moroccan people Guinea’s gratitude to Morocco, which has always supported Guinea,” said the Guinean top diplomat, noting that Morocco was the first country to coordinate with the new Guinean authorities. “Morocco is always committed alongside Guinea and Guineans”, he said. The minister urged Moroccan businessmen to explore investment opportunities in his country, underlining the convergence of views between the two countries on several issues.