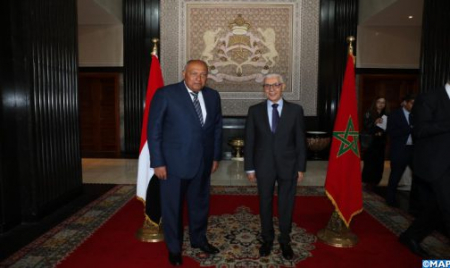 Speaker of the House of Advisors (upper house), Naama Mayara, met Tuesday with Egyptian Foreign Minister Sameh Choukri, who is on a working visit to Morocco. During this meeting, the two sides reviewed various aspects of bilateral relations, including in the parliamentary area, stressing that the strong ties between the two countries continue to develop thanks to the instructions of His Majesty King Mohammed VI and His brother, His Excellency President Abdel Fatah Al-Sissi, who manage Moroccan-Egyptian relations with wisdom, lucidity and foresight. According to a statement from the Upper House, Mayara highlighted the historical relations between the two countries, the convergence of their points of view and their mutual support on major issues of common interest, welcoming the content of the joint statement, released on Monday after the Egyptian minister’s talks with his Moroccan counterpart, Nasser Bourita. He also expressed the readiness of the House of Advisors to contribute, through its constitutional status, to the implementation of the important decisions agreed upon, adding that these decisions will give strong impetus to the bilateral cooperation relations. The Council’s prerogatives and experience, particularly in the economic and social field, enable it to play a leading role for greater cooperation between the businessmen of the two countries, the source points out. The Speaker of the Upper House also recalled the memorandum of understanding signed between the Council and the Egyptian Senate during the last visit of its President to Morocco and which provides in particular for close coordination between the two institutions and the intensification of mutual visits, in the service of the higher interests of the two countries at the bilateral level and in the various regional and international parliamentary bodies. For his part, the Egyptian Foreign Minister praised the wise leadership of HM King Mohammed VI, who has always been able to preserve Morocco’s security and stability, in a turbulent regional and international context. Mr. Sameh Choukri underlined that Morocco is a pioneering country in its Arab-Islamic environment, recalling in this regard the chairmanship of HM the King of the Al-Quds Committee which testifies to the special attention that the Kingdom pays to the Palestinian cause and to Al-Quds Al-Sharif. On the other hand, the Egyptian official stressed the need to deepen economic cooperation between the two countries, particularly in the field of clean energy given the promising potential of the two countries in this area, recalling the Kingdom’s support for the organization by Egypt of the 27th Conference of the Parties to the United Nations Framework Convention on Climate (COP27) scheduled for next November.