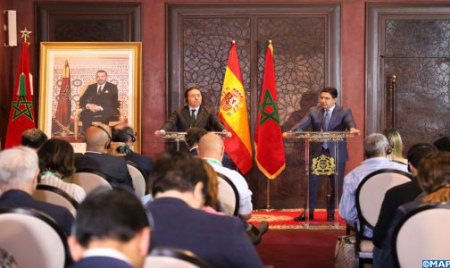 The Joint Statement adopted at the end of discussions between HM King Mohammed VI and the President of the Spanish government Pedro Sánchez has opened new prospects for bilateral relations, underlined, Tuesday in Marrakech, minister of Foreign Affairs, African Cooperation and Moroccans Abroad, Nasser Bourita. Speaking at a joint press briefing with the Spanish Foreign Minister, José Manuel Albares, following their talks, Bourita said that the joint statement identified a series of steps and measures that should be implemented to give strong impetus to bilateral relations, saying that the new stage of relations between the two neighboring countries is “based on cooperation, coordination, ambition and mutual respect”. In this regard, Mr. Bourita noted that his talks with the Spanish Foreign Minister focused on the measures taken to implement the roadmap, noting that the Moroccan side, in accordance with the High Instructions of His Majesty the King Mohammed VI, worked “with rigor and diligence to develop and implement these measures”. “Based on this commitment, and in accordance with the High Instructions of His Majesty the King, the Moroccan side is working to ensure the full implementation of all elements of the joint statement, including those related to the smooth movement of people and goods between the two countries,” he said. Mr. Bourita also stressed that the Kingdom will continue to implement the elements of the Joint Statement “within the framework of the same logic of serious consultation to achieve the vision of His Majesty the King and His Excellency the President of the Spanish Government, for a strong relationship and partnership in all areas, away from unilateral decisions and anything that would cause friction between the two countries”. In this context, he stressed that the results of bilateral cooperation are beginning to materialize in the fields of immigration and security and economic cooperation, adding that Moroccan-Spanish cooperation is exemplary and recognized at the regional, European and international levels. Since the in-depth talks between His Majesty King Mohammed VI and the President of the Spanish Government, several results have been achieved on several fronts, including Operation Marhaba, the maritime link between the two countries and the meeting of Moroccan-Spanish work teams on immigration, underlined Mr. Bourita, adding that Rabat and Madrid have scheduled a series of meetings, including a bilateral work team on culture and scientific and educational exchange, and two other teams on the delimitation of maritime borders and airspace management, in addition to mutual visits between the different sectoral ministries. Mr. Bourita also assured the Spanish Minister that “Spain can count on Morocco, a reliable, honest and responsible partner, to build an exemplary partnership between the two neighboring countries which share several interests and a common history”, noting that Morocco wants, in accordance with the instructions of His Majesty the King, to strengthen consultation with Spain on international, regional and multilateral issues. He also stressed that Morocco is counting on Spain as a partner and ally in its relations with the European Union, and wishes to work together with Spain to establish a coordination framework in the Euro-Mediterranean area, and on regional and security issues in the Sahel, North Africa and the African continent. Morocco and Spain can work, in this new framework of partnership, as allies and partners at the service of their peoples, he said, adding that the Moroccan-Spanish relationship “does not harm any party, but rather safeguards bilateral interests, strengthens partnership, and promotes security and stability.”