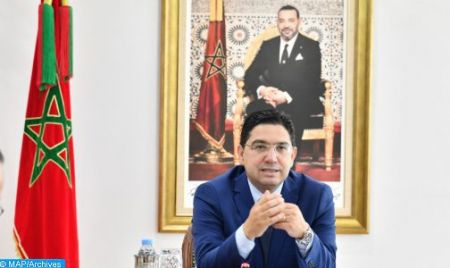 Morocco advocates a multilateral response to face global terrorist threats, stressed Wednesday in Marrakech, Minister of Foreign Affairs, African Cooperation and Moroccans Abroad, Nasser Bourita. “In response to global threats, such as terrorism, it is Morocco’s doctrine to advocate for multilateralism, especially one that promotes solidarity, ownership and inclusiveness, through intelligence sharing, capacity-building and training of religious leaders,” said Bourita at the opening of the Ministerial Meeting of the Global Coalition to Defeat ISIS. In this regard, he stressed that the Moroccan co-chairmanship of this first meeting of the Global Coalition to Defeat ISIS in Africa “provides an additional platform for the Kingdom to share experiences learned from its holistic and integrated Counter Terrorism Strategy, developed under the leadership of His Majesty King Mohammed VI”. In this regard, he stressed that the recent inauguration of the UNOCT Program Office for CT and Training in Africa in Rabat, “offers a way forward that could further contribute to the Coalition’s capacity-building efforts,” adding that “this UN Office based in Rabat is, indeed, an important addition to the CT architecture in Africa as it offers capacity-building programs to countries on the continent in several key specialized areas”. Recalling that Morocco will mark in a few days the sad commemoration of the terrorist attacks in Casablanca on May 16, 2003, Bourita stressed that the Kingdom in accordance with the Vision of His Majesty King Mohammed VI has put in place, since these attacks on its soil and against its people, “an efficient, multidimensional and holistic strategy to combat terrorism and violent extremism,” which has allowed Morocco to “dismantle more than 210 terrorist cells since 2002, among other achievements”. The best practices achieved by Morocco’s Security Services, as well as the Kingdom’s outstanding approach in the field of de-radicalization, also offer a tested toolbox for our long-standing engagement with African Brotherly Countries facing the evolving threat of terrorism, he added. “This approach reflects a deep belief in Africa’s own capabilities to turn the tide, as underlined by His Majesty King Mohammed VI before the 29th Summit of the African Union: + I have always firmly believed that Africa can turn the challenges it is facing into genuine prospects for development and stability+” , Bourita stressed.