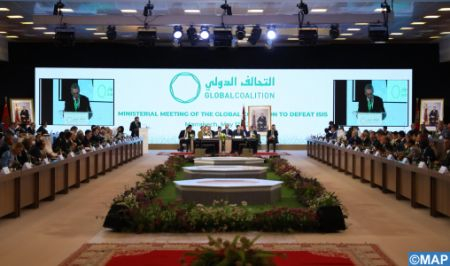 The Ministerial Meeting of the Global Coalition to Defeat ISIS opened, Wednesday in Marrakech, with the participation of representatives of more than 80 countries and international organizations. Organized at the joint invitation of Minister of Foreign Affairs, African Cooperation and Moroccans Abroad, Nasser Bourita, and the U.S. Secretary of State, Antony Blinken, this first meeting of the Global Coalition to Defeat ISIS in Africa is another step in the pursuit of international commitment and coordination in the fight against Daesh, with a particular focus on the African continent as well as the evolution of the terrorist threat in the Middle East and other regions. At this meeting, Coalition ministers will review actions taken in terms of stabilization efforts in areas previously impacted by Daesh, in the area of strategic communication against the radicalization propaganda of this terrorist group and its affiliates, and the fight against foreign terrorist fighters.