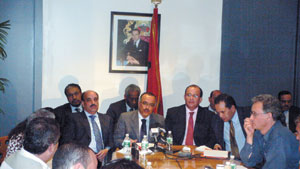 After the first, the second and the third round of negotiations between Morocco and the Polisario front, one has the right to question if the fourth round, scheduled on March 2008 in Manhasset, will get to a real engagement of the two parties to held in good faith, substantial negotiations to find an exit to the Sahara conflict, especially when the two parties seem conscious of the seriousness and the gravity of the situation.
The syndrome of the delaying tactics concerns the contradiction of the Polisario, which while adhering to the process of negotiations, proclaims its threat of resumption of the war in the region. The answer to this threat was clearly expressed by a high ranked Moroccan personality in charge, who while confirming the will of Morocco to collaborate in finding a mutually acceptable solution, is ready to react vigorously to any attempt to territorial integrity and security.
The masked argument of Algeria, whispered to the Polisario on the right to self-determination of the sahraouis, proved its pure and simple failure and the abundant of this option is not dictated by a partiality of the UN but rather by the difficulties inherent in this proposition. The successive Secretary-General of the United Nations had drawn the attention to the inconveniences of the referendum. It would generate only blockings.
Algeria and the Polisario, which required the systematic application of self-determination though convinced of it’s none application, continue to be opposed to any political exit to the crisis.
On several occasions, by the means of its sovereign, Morocco declared that the building of viable and lasting solution is recognition of Morocco’s Sahraoui borders. For that, it needs the adhesion of all protagonists including of course, the leaders and the elements of the Polisario frente. Autonomy would be then warranty of a regional specificity within the framework of a unified state-nation and could, beyond the compromise, constitute an extraordinary laboratory for the construction of a new architecture of the Kingdom.