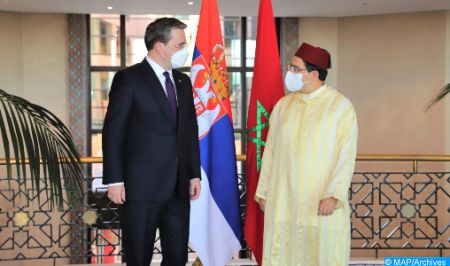 Serbia reiterated, on Wednesday, its position considering the Kingdom’s autonomy plan, under Moroccan sovereignty, as a serious and credible solution for the resolution of the Sahara issue. This position was expressed in a joint statement issued following talks between the Minister of Foreign Affairs, African Cooperation and Moroccans abroad, Nasser Bourita, and his Serbian counterpart Nikola Selaković, on the sidelines of the Ministerial Meeting of the Global Coalition to Defeat ISIS, held in Marrakech. On this occasion, the Serbian minister highlighted the diplomatic and political efforts made by the Kingdom of Morocco to achieve a realistic, pragmatic and lasting political solution to the Sahara issue, in a spirit of realism and compromise and in full compliance with UN resolutions. Regarding the issue of Kosovo and Metohija, Morocco supports the territorial integrity and the sovereignty of the Republic of Serbia in its internationally recognized borders, as well as the dialogue between Belgrade and Priština under the auspices of European Union, the joint statement said. The two ministers also welcomed the convergence of views of the two countries on issues of common interest, at the regional and international levels.