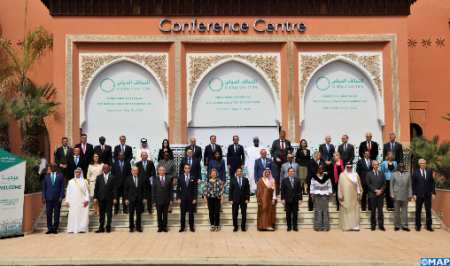 The Ministerial Meeting of the Global Coalition to Defeat ISIS wrapped up on Wednesday in Marrakech, in the presence of representatives of over 79 countries and international organizations. The International meeting was attended by 47 ministers, including 38 FMs, who actively participated in the debates focused on regional security and stability to dry up the sources of terrorism and extremism in Africa. The first meeting of the Global Coalition to Defeat ISIS in Africa was held at the joint invitation of the Minister of Foreign Affairs, African Cooperation and Moroccans Abroad, Nasser Bourita, and the U.S. Secretary of State, Antony Blinken. It was an opportunity to continue international engagement and coordination in the fight against Daesh with a particular focus on the African continent and on the evolving terrorist threat in the Middle East and other regions. During this meeting, the Coalition’s ministers reviewed the actions undertaken in terms of stabilization efforts in areas previously impacted by Daesh, in the field of strategic communication against the radicalization propaganda of this terrorist group and its affiliates, as well as the fight against foreign terrorist fighters. Morocco has put in place an “effective, multidimensional and holistic” strategy in the fight against terrorism, in line with the vision of HM King Mohammed VI, FM Nasser Bourita said at the opening of the event. He also stressed that Morocco’s co-chairmanship of the Group provides an additional platform for the Kingdom to share experiences learned from its holistic and integrated Counter-Terrorism Strategy, developed under the leadership of HM King Mohammed VI. For her part, the US Under Secretary of State for Political Affairs, Victoria Nuland stressed the commitment of the Global Coalition to Defeat ISIS to ensure the lasting defeat of Daesh in Iraq and Syria, in Africa and worldwide. The hosting by Morocco of this international event reflects the confidence enjoyed by the singular approach implemented by the Kingdom under the enlightened leadership of HM King Mohammed VI in the fight against terrorism. This meeting confirms Morocco’s firm commitment to coordinate closely with its partners to combat the threat emanating from ISIS and thus curb the sources of terrorism and extremism in Africa.