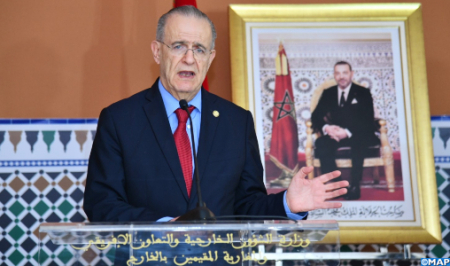 The Cypriot Foreign Minister, Ioannis Kasoulides, expressed, on Wednesday in Marrakech, his country’s support for the autonomy plan in the Sahara as a compromise-based solution for the settlement of this dispute. This position was expressed by Mr. Kasoulides during a joint press briefing with the Minister of Foreign Affairs, African Cooperation and Moroccans Abroad, Mr. Nasser Bourita, on the sidelines of the ministerial meeting of the Global Coalition to Defeat Daesh. The Cypriot top diplomat underlined his country’s support for the principle of respect for the territorial integrity of countries and for the resolutions of the UN Security Council, firmly rejecting all attempts at separatism facing Morocco, but also Cyprus. For his part, Mr. Bourita praised the position of support of the Republic of Cyprus in favor of the territorial integrity of the Kingdom and a compromise-based solution on the basis of the autonomy plan, stressing that this position opens up new prospects in bilateral relations. “We will work together today to establish a roadmap for bilateral cooperation in all areas,” he said. Mr Bourita stressed that this position of Cyprus reinforces a momentum which has now become clear at the European and international levels in favor of the solution proposed by the Kingdom of Morocco, which is intended to be a solution based on compromise within the framework of an autonomy that respects the sovereignty of Morocco and its territorial integrity.