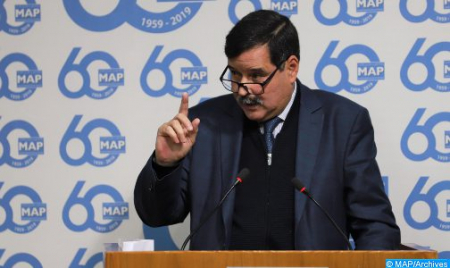 The Algerian regime is increasingly isolating itself from its people and the international community, underlines writer and journalist Talaâ Saoud Al Atlassi. ”It would be vain for the Algerian regime to seek to reconcile with its people and improve its foreign relations by posing as the victim of conspiracies to actually establish its military, economic and political domination over the country,” Al Atlassi points out in an op-ed published Wednesday by Machahid 24 news website. “The reason is that the room for maneuver of this regime has shrunk to a trickle”, he explains. “The isolation of the military regime towards the Algerian people can be seen through the popular movement (Hirak) which has been going on for years as well as the confirmed split between the elite once in power and this regime, given that several political leaders are either behind bars for corruption, or forced into silence or forced to resign”. He notes, therefore, that ”the Algerian regime today operates in a vacuum under the orders of a closed circle of generals, the others being reduced to the role of extras and substitutes in time-outs. In short, it is a powerless regime without popular support”. According to this journalist specializing in Algeria, the Algerian regime is absent on the external level, sinking more and more into its solitude. It has maintained the separatist movement of the Polisario for more than four decades, trying in vain to destabilize Morocco and cut it off from its African extension with the intention of gaining access into the Atlantic to export its gas and impose its hegemony,” Al Atlassi adds. But, he notes, the result today is quite the opposite since the Algerian regime has condemned itself to political isolation on the international scene and in terms of history, which harms the interests of Algeria and aggravates its situation, while Morocco has become stronger and more open to Africa with great avenues and huge opportunities. The journalist stresses, moreover, that the Algerian regime has vainly tried to exploit the Polisario against Morocco but this proved to be wrong as this separatist movement has today become a specifically Algerian problem, a heavy burden which harms Algeria both internally and externally. He adds that this regime which has long made Algeria a host country of the Polisario in Tindouf, today assumes a triple responsibility at the same time: political, strategic and financial following the failure of its maneuvers of instrumentalization of this movement at the international level. According to Al Atlassi, the Polisario has become an Algerian problem, this means that “this instrumentalization has isolated the regime at the international level, which has become inaudible in international forums, in particular at the Security Council. On the other hand, the peaceful and pragmatic Moroccan plan imposes itself today in “an indisputable and undisputed way,” he points out. “The Algerian regime, which is sinking more and more into its isolation, cannot catch up with Morocco in its progress, its achievements and its presence on the international scene,” Al Atlassi stresses, adding that ”the hand extended by Morocco is the best possible option as well as a historic choice to pull Algeria out of the depths of the past and thus be able to project itself into the future”.