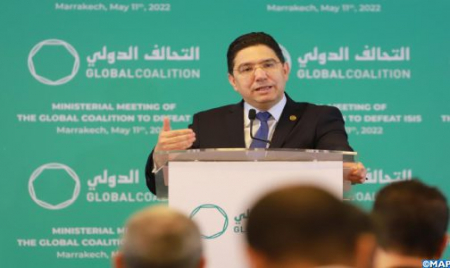 The ministerial meeting of the Global Coalition to Defeat Daesh was a success at all levels, underlined, Wednesday in Marrakech, minister of Foreign Affairs, African Cooperation and Moroccans Abroad, Mr. Nasser Bourita. The success of this international meeting, organized at the joint invitation of the Minister of Foreign Affairs, African Cooperation and Moroccans Abroad, Mr. Nasser Bourita, and the U.S. Secretary of State, Mr. Antony Blinken, is reflected through the participation of 79 countries, including 19 from Africa, 8 from Asia and 9 delegations from the Arab world. Mr. Bourita stressed that this international event was marked by the presence of 47 ministers, including 38 ministers of foreign affairs, who all participated personally and actively in the discussions, noting that more than 400 participants contributed to the success of this meeting. The Marrakech meeting saw the Republic of Benin join as a new member of the Coalition, thus becoming the 85th member. These are not the only factors behind this success, said Mr. Bourita, noting that this success is also displayed through three main areas, the first of which relates to Africa, with particular emphasis on the challenges of the continent which constitutes a priority in the vision of His Majesty King Mohammed VI, in particular the issues of security, development and the fight against terrorism, which are at the heart of the Kingdom’s foreign policy. The second factor, he explained, lies in “Morocco’s success in formulating effective and unique national responses in its fight against the terrorist phenomenon, which gives it credibility at the international level, and makes its national experience a source of inspiration for several friendly and partner countries, especially those on the African continent”. The third factor, he said, relates to “Morocco’s deep and firm conviction that the fight against terrorism requires a global and coordinated collective effort that addresses the different aspects of this phenomenon, within the framework of an approach based on cooperation and coordination”. The Ministerial Meeting of the Global Coalition to Defeat Daesh highlighted these three axes which find their true meaning in the Royal vision, insofar as the emphasis was placed on the situation in Africa, said Mr. Bourita, stressing that Africa has now become a major target for terrorists, hence the importance of mentioning it.