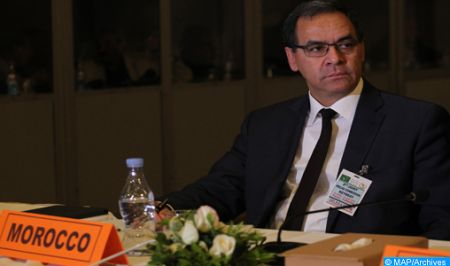 Morocco reiterated, on Thursday in Addis Ababa, its constant and resolute commitment to maintaining peace and security in Africa before the Specialized Technical Committee on Defense, Safety and Security (STCDSS) of the African Union (AU). The military cooperation between Morocco and its African partners is part of its vision of solidarity and traditional cooperation aimed at preventing conflicts and maintaining peace and stability in the African continent, said Mohamed Arrouchi, Ambassador and Permanent Representative of the Kingdom to the AU and UNECA, who leads the Moroccan delegation to the 14th Ordinary Ministerial Meeting of the STCDSS. This cooperation, he explained, covers multiple areas including education and training and training which can further strengthen the interoperability of forces and operational capabilities of armies, particularly in peacekeeping and combined training. The Kingdom’s efforts to promote peace and security in Africa are demonstrated through its active contribution to the various missions deployed in the African continent and through the humanitarian component with the deployment of several medical-surgical field hospitals in recent years, the diplomat observed. Building on its experience and its operational potential, the Kingdom places its efforts in the service of peace and security in Africa and confirms its commitment to the defense of the values of peace and security, Arrouchi added. The 14th ordinary ministerial meeting of the STCDSS is expected to consider the report of the chairperson of the AU Commission which outlines the commission’s continued effort in the enhancement of the African Standby Force (ASF) and deployment of peace support operations, to address conflicts, terrorism and violent extremism as well as broader peace and security challenges in the continent. It will also exchange views on the memorandum of understanding between the African Union and the Regional Economic Communities and Regional Mechanisms on the African Standby Force.