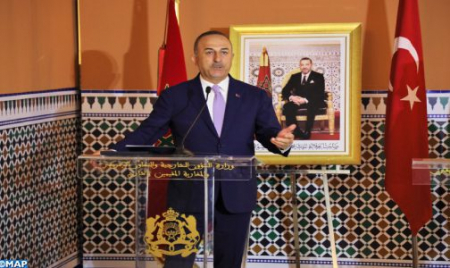 Turkish Foreign Minister Mevlut Cavusoglu reiterated, Wednesday in Marrakech, his country’s support for the territorial integrity of the Kingdom. “I would like to reiterate Turkey’s position of principle in favor of the territorial integrity and sovereignty of countries, and reaffirm Turkey’s support for the sovereignty and territorial integrity of the brotherly country of Morocco”, said the Turkish top diplomat during a joint press briefing with the Minister of Foreign Affairs, African Cooperation and Moroccans Abroad, Nasser Bourita, following their talks held on the sidelines of the Ministerial Meeting of the Global Coalition to Defeat ISIS. After expressing his thanks to Morocco for inviting Turkey to this international meeting, which was attended by 79 countries, Mr. Cavusoglu underlined the convergence of the two countries’ points of view on several regional issues. The Turkish top diplomat stressed that this meeting take place at an important time, in light of the persistent threat posed by terrorist organizations in Africa and Asia. For his part, Bourita said that Morocco “appreciates Turkey’s position on the Sahara issue”, adding that “we, in turn, support Turkey in its fundamental issues”. In accordance with the High Instructions of His Majesty the King and His Excellency the President of the Republic of Turkey, “we are working to strengthen bilateral relations in all areas”, added Mr. Bourita, noting that the two countries are “friends and partners” and maintain permanent consultation on numerous issues, in particular the Libyan issue. He said that this bilateral meeting was an opportunity to discuss several international and regional issues. Mr. Bourita noted that the two sides have agreed to exchange visits, to convene the joint economic commission and to increase meetings between the private sector of the two countries.