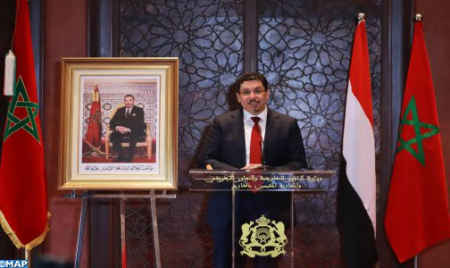 Yemeni Foreign Minister, Ahmed Awad Bin Mubarak, commended, Thursday, the Kingdom’s political and humanitarian support to Yemen. In a joint statement issued following talks with the Minister of Foreign Affairs, African Cooperation and Moroccans Abroad, Nasser Bourita, on the sidelines of the Ministerial Meeting of the Global Coalition to Defeat ISIS (May 11 in Marrakech), the Yemeni official expressed his country’s appreciation and gratitude for the positions of the Kingdom of Morocco, under the leadership of HM King Mohammed VI, in support of legality in Yemen and of the country’s territorial integrity. He also welcomed HM King Mohammed VI’s initiative to donate one million dollars as a contribution of the Kingdom of Morocco to international solidarity efforts, on the occasion of the High-level Pledging Event for the Humanitarian Situation in Yemen, held last March. For his part, Bourita reiterated Morocco’s support to the Presidential Leadership Council, chaired by Rashad Al-Alimi, voicing the hope that it will be able to carry out its missions in the best conditions, to complete this transitional phase to ensure Yemen’s territorial integrity and its sovereignty over the entire territory. The end of the crisis in Yemen must come through a political solution, under the relevant international resolutions, in particular, the Security Council Resolution No. 2216, the GCC Initiative and its implementation mechanisms, as well as the conclusions of the national dialogue, he added. The two FMs agreed to strengthen coordination and consultation on various bilateral and regional issues, reaffirming their will to improve the legal framework through the upcoming signature of an MoU on political consultation between the two countries.