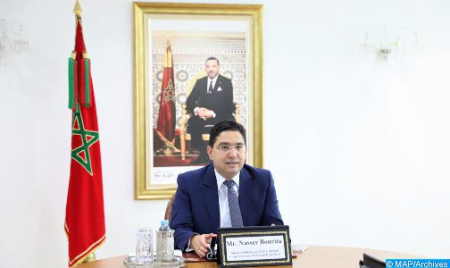 A “new stage” is beginning in Moroccan-Spanish relations, the Minister of Foreign Affairs, African Cooperation and Moroccans Abroad, Nasser Bourita, said on Friday. In an interview with Radio France internationale (RFI), the minister stressed that Morocco hopes that this model will inspire the Kingdom’s relationship with other European and Mediterranean countries. “This is a new stage that is beginning in our bilateral relations, based on mutual respect, ambition, and respect for commitments”, added the minister, noting that “today Morocco and Spain will present a different model of relations between the two shores of the Mediterranean”. “I hope this Moroccan-Spanish model will inspire Morocco’s relationship with other European and Mediterranean countries,” he said. Regarding Spain’s new stance on the Moroccan Sahara issue, Mr. Bourita recalled that the first time Spain marked a positive assessment of the autonomy initiative dates back to 2008 and that this country stopped referring to self-determination and the referendum in 2017. “Those who want to create this shortcut, don’t want to see a reality, that there is an international movement,” he pointed out, adding that those who continue to defend these outdated options are a “small minority that wants to exploit the Sahara issue to prolong a status quo that is detrimental to regional stability”. The Spanish stance is part of a movement, which is observed at the level of the United Nations as well as at the European, African and Arab levels, said the minister. Asked about his meeting with his Spanish counterpart José Manuel Albares in Marrakech on the sidelines of the ministerial meeting of the Global Coalition to Defeat ISIS, Mr. Bourita recalled that this is the first visit of the Spanish top diplomat after the meeting between HM King Mohammed VI and the President of the Spanish government. “We had a lot of formal and informal meetings, etc., first to follow up on the agreed roadmap, and we found out that a large number of the measures announced have been implemented: maritime links have been restored; migration working group met, made decisions; the preparations for the Moroccan transit operation to the Strait of Gibraltar are going in the right direction; working groups on maritime delimitations, on the management of airspace will be held next month in Spain,” the minister explained. Commenting on the ministerial meeting of the Global Coalition to Defeat ISIS, which was held for the first time in the African continent since its creation in 2014 with the participation of 70 delegations, the minister stressed that ISIS and other movements have redeployed towards Africa, hence the need for the coalition to integrate this development. According to him, the debates allowed a clear, fruitful exchange and a better understanding of the terrorist movement in Africa, noting that there was a will of the coalition to support the efforts of African countries in terms of the provision of resources, and “more importantly, there was agreement on the approach”. “We do not need to develop a strategy to fight terrorism in Africa but we need to strengthen existing strategies. First national ones, and then sub-regional strategies”, he said.