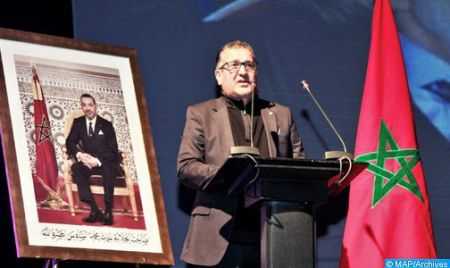 The writer-journalist, Abdelhamid Jmahri, considered that the Algerian Ministry of Foreign Affairs has despised sovereign states, whose only reproach has been to support the legitimacy and legality of the Moroccan Sahara issue. In an article entitled “Reflections on the communiqué of the Algerian defeat in Marrakech!” published Saturday in the daily ”Al Atihad Al Ichtiraki”, the journalist wrote that the day of the meeting of the Global Coalition to Defeat ISIS in Marrakech has been a long ordeal for Ramtane Lamamra, given that Morocco has received great explicit, responsible and written support from many foreign ministers. This situation experienced by the Ministry of Lamamra has a name: failure, he noted. For what reasons are 80 countries convinced to side with Morocco in its national cause, if not for its convincing argument? and what country would have complained to Algeria for compromise, if it held to the moral infallibility of participating countries in an international effort to fight terrorism and ensure world peace, which requires first intellectual courage and integrity? wondered the journalist. He also considered that by wanting to insult Morocco, Algeria has deliberately and premeditatedly offended all participating countries by accusing them of having given in to a “bargain”, adding that Algeria has repeated its offenses against participating countries. After calling some countries “entities likely to be misled”, Algeria accused others of “contradictions”, thus sparing no country with its archaic degrading “lexicon”, which reflects the baseness of its diplomacy. The communiqué of the Algerian Ministry of Foreign Affairs revealed the country’s bruised pride only at the end, when it congratulated itself for the fight against terrorism, boasting that “Algeria has paid a heavy price to terrorism and defeated it”, as if to say that the country’s absence in Marrakech was a “loss” for the meeting, a message that cannot be misunderstood by observers, let alone experienced diplomats like those who were present in Marrakech. Algeria has failed to make a convincing offer to the United States, the country that carries the project to fight terrorism after September 11, 2001, to strengthen security, political, diplomatic and military cooperation in the fight against terrorism, noted Jmahri, stressing that the world could not ignore the Moroccan proposal to fight against terrorism with all the evidence presented in its fight against extremism, as well as the advanced levels of its bilateral and collective cooperation, on the regional, continental and international levels, welcomed by the organizations concerned. A struggle that focused on religious reform, security expertise and intelligence skills, and the development dimension, without sacrificing democratic reform. “What officials in Algeria did not want the national public to pay attention to is exactly what the international public has noticed, namely that Morocco is a guarantor of security and peace, and that its fight against terrorism is an existential one, as is its fight against separatism,” he added. Morocco’s view that separatism feeds on terrorism and vice versa has become a principle for all, he said. Does Algeria have the right to comment on an international meeting, even though it has unintentionally elevated Morocco to the role of decisive actor in the meeting? Can it blame Morocco for defending itself and its international viewpoint and its thesis that separatism is akin to terrorism? thesis that it supports by documents, expertise and international cooperation in this area, knowing that Algeria is the country that does not hesitate to raise the issue of separatism, even at sporting events and conferences on the interpretation of dreams, and sometimes at more serious conferences, such as the Arab summit, which will be, according to Algeria, a meeting around the Palestinian cause and the Sahara issue! the journalist wondered What afflicts Algeria without a doubt, the journalist stressed, is the conviction at the meeting that there is an organic and structural link between terrorism and separatism in Africa, and this view is shared by all Moroccans. Morocco no longer needs proof to present to the world, noted Jmahri, adding that “if one wants to describe more accurately the psycho-diplomatic defeat of the neighboring country, it is right to fear that its separatist protégé has turned into a “specter” or a “phantom formula” of a “frequent stratagem” called the decolonization thesis, or that this specter is simply part of the list of terrorist organizations, having become a laboratory for desperate people in search of jobs with bloodthirsty generals» .