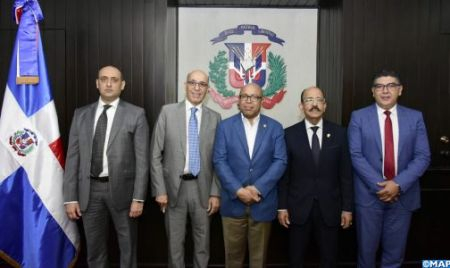 The consolidation of legislative cooperation was the focus of talks Friday in Santo Domingo between a delegation of the House of Advisors and president of the House of Representatives of the Dominican Republic, Alfredo Pacheco. The Moroccan delegation, composed of the Permanent Observer of the House of Advisors to the Parlacen, Ahmed Lakhrif, and the secretaries of the said House Moustafa Moucharik and Jaouad Hilali, was accompanied by HM the King’s ambassador to the Dominican Republic, Hichame Dahane. Pacheco was accompanied, for his part, by President of the Committee on Foreign Relations and International Cooperation of the Dominican Congress, Julio Alberto Brito Peña, President of the Moroccan-Dominican Parliamentary Friendship Group of the House, Rosa Hilda Genao Diaz, as well as other deputies members of the group. According to a statement of the Moroccan diplomatic mission received by MAP, the two parties welcomed the dynamics of cooperation between the two institutions, while calling for their strengthening in favor of the consolidation of ties of friendship, esteem and mutual respect between the Kingdom and the Dominican Republic. They welcomed the celebration, in 2020, of the 60th anniversary of diplomatic relations between the two countries, and expressed their commitment to contribute to their development in all directions for the benefit of both friendly peoples. The Moroccan and Dominican elected officials also highlighted the existing instruments of cooperation within the legislative institutions of both countries, in particular the mechanism of friendship groups, in order to promote the rapprochement between the Moroccan parliamentarians and their Dominican counterparts. This meeting took place on the sidelines of the participation of the Moroccan delegation in the seminar “Kingdom of Morocco-Parlacen: Exchange of experiences and best practices for sustainable environmental development and the fight against climate change”, organized on May 11 by the Embassy of the Kingdom in the Dominican Republic and the Dominican section of Parlacen, in collaboration with the The Institute of Higher Education for Diplomatic and Consular Training of the Dominican Ministry of Foreign Affairs.