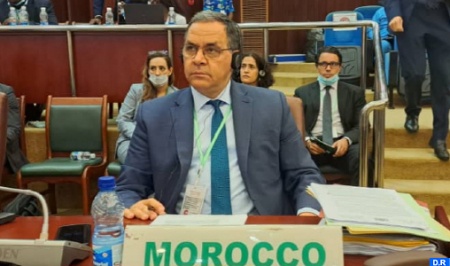 Morocco on Tuesday pleaded for an inter-African cooperation to meet the challenges of food and health security in Africa. These statements came from Ambassador Mohamed Arrouchi, Morocco’s Permanent Representative to the African Union and the UNECA, during the 4th Session of the Specialized Technical Committee on Migration Refugees and Internally Displaced Persons held on May 23 and 24 in Equatorial Guinea’s Malabo. On this occasion, the Moroccan diplomat reiterated the call for an African alliance and inter-African cooperation to meet the challenges of food and health security in Africa. During his intervention in the panel devoted to food security and nutrition in the global humanitarian context in Africa, Arrouchi stressed that the African continent continues to be a major importer of food spending about 43 billion dollars per year and risks reaching 110 billion dollars in 2025, in the absence of a common and urgent African response. Arrouchi also recalled that the African continent has about 60% of the world’s uncultivated arable land, and that according to 2020 statistics from relevant international agencies, more than 281 million Africans were undernourished (21% of the continent’s population), an increase of 89 million more than in 2014, and 346 million were severely food insecure. These figures show that Africa is not on the right track to achieve the target goals of sustainable development aimed at eradicating hunger and improving food security in the African continent, noted the diplomat who leads the Moroccan delegation to this 4th Session of the CTS on Migration, Refugees and Internally Displaced Persons composed of various sectoral departments. In addition, Arrouchi stressed that despite the rising trend of food security challenges, the African continent has the necessary means, both in terms of human capital and natural resources to overcome these challenges. To this end, he called for urgent inter-African cooperation based on goodwill and confidence in Africa, while stressing that the Kingdom of Morocco remains willing to share with sister countries its expertise and know-how in the field of food security, through the AAA initiative of the adaptation of African agriculture which is a multidimensional approach in the framework of food security. Regarding the COVID-19 pandemic, the Moroccan diplomat stressed that the African weakness in terms of health infrastructure and expertise hint at the difficulties that the African continent could face in the future. In this regard, the Moroccan Ambassador recommended the creation of a platform of African experts in the field of epidemics that the continent could face, and this in the framework of synergy and inter-African cooperation.