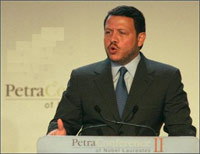 We knew the very strong friendship between deceased their Majesties King Hassan II and Hussein of Jordan. Their children took over and it is with “force” that the Hashemite sovereign reinterred the support of his Kingdom to the Moroccan autonomy initiative for the Southern provinces.
It is an important support coming from one of the leaders of the Arab countries historical ally of morocco and especially having the same vision as the Kingdom, namely the democratic opening, the dialogue, and the transparency. The governing styles of the Hashemite and alaouite sovereigns have a lot in common indeed on several aspects: same dynamism, same wish of going pane, to be on all the fronts, and to balance the social conflicts allowing their respective countries to take off economically. This announcement of the Hashemite sovereign intervened whereas the dissenting faction of the Polisario Frente “Khat Achahid”, request that a new delegation to be made up to discuss the autonomy project with Morocco.
This major evolution of the Sahara file intervenes whereas the Polisario Frente seems more and more isolated and that the IV round of negotiations under the aegis of the UN was announced for next March. It becomes imperative for the Polisario Frente to find something to hand to the UN facilitators; so much its position becomes increasingly difficult. For that, the Polisario needs to take its responsibilities, like Morocco who decided to face the situation with courage by proposing a large autonomy to its southern provinces.