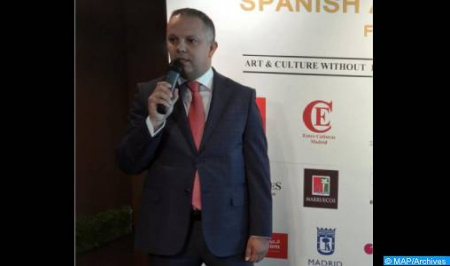 His Majesty King Mohammed VI places the African citizen at the heart of his concerns, with an emphasis on the dimensions of peace, security and development, said Morocco’s ambassador to Peru, Amin Chaoudri. “Africa Day (May 25) provides an opportunity to highlight Morocco’s African commitment and its solidarity with the 54 countries of the continent in accordance with the far-sighted vision of HM the King, who places the African citizen at the heart of his concerns and promotes the dimensions of peace, security and development for the emergence of a strong, united and secure Africa”, the Moroccan diplomat pointed out at a ceremony organized in Lima to celebrate this day. Morocco was the guest of honor at this ceremony, organized Thursday at the National Afro-Peruvian Museum by the Congress’ Foreign Relations Committee as part of the celebration of the 59th World Africa Day, according to a statement from the Moroccan embassy. The event was attended in particular by Mrs. Maria Alva Prieto, Speaker of the Congress of the Republic, Mr. Ernesto Bustamante Donayre, President of the Congress’s Foreign Relations Committee and President of the Morocco-Peru parliamentary friendship group, Peruvian MPs of African origin, members of the Afro Peruvian association and representatives of the ministry of Foreign Affairs. Mr. Chaoudri stressed that “Morocco’s African vocation is materialized, in particular, through the Kingdom’s return to its African institutional family, the various official visits made by HM the King to several African countries, the signing of several agreements related to investment and cooperation and the opening of consulates, mostly from African countries, in the Moroccan Sahara”. The Kingdom, he added, has always affirmed its African identity by placing the continent at the center of its diplomatic priorities and by attaching great importance to the development of its relations with African countries at the political, socio-economic, cultural and spiritual levels. For her part, Mrs. Maria Prieto noted that in order to strengthen the contributions of the African embassies in Lima, in this case that of Morocco, on the basis of the historical and cultural ties that bind them, Peru is called upon to give a new dimension to its diplomatic and economic relations with the countries of the African continent. For his part, Mr. Ernesto Bustamante Donayre underlined that Africa is the cradle of mankind, stressing the need to highlight the contribution of the African element for the development and progress of the Andean country. In the evening, a reception was organized at the Moroccan residence in honor of the Speaker of the Congress, the President of the Foreign Relations Committee, as well as other members of the Congress, diplomats and friends of Morocco.