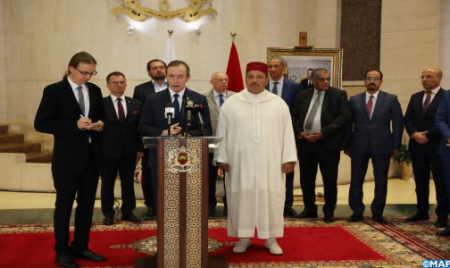 The Speaker of the Polish Senate, Tomasz Grodzki, has commended the advanced relations between Morocco and Poland as well as the stability and peace enjoyed by the Kingdom. During his talks Friday in Rabat with the Speaker of the House of Advisors (upper house), Naama Mayara, the Polish official stressed the importance of coordinating the action of friendship and cooperation groups between the Polish legislative institution and the Moroccan upper house to serve the interests of the two friendly peoples and countries, says a statement from the House of Advisors. The Speaker of the Polish Senate reiterated his country’s clear and unwavering position regarding the Moroccan Sahara issue, which consists in supporting the efforts undertaken under the auspices of the United Nations as well as in favoring dialogue, tolerance and peaceful means. The Polish official said he is optimistic about the increase in the volume of trade between the two countries, although it still falls short of their joint ambition given their promising potential in several areas, particularly in the tourism sector. He also mentioned the negative impact of the conflict in Ukraine, particularly with regard to the global shortage of some basic products, including wheat. For his part, the Speaker of the House of Advisors hailed the Polish position with a view to achieving a just and fair solution to the artificial conflict over the Moroccan Sahara, stressing the seriousness, credibility and realism of the autonomy plan presented by Morocco, at a time when the other parties cling to outdated positions that do not keep up with the deep changes taking place in the world today. This meeting was also an opportunity for Mr. Mayara to underline the worrying repercussions of the evolution of the situation in the Sahelo-Saharan region, which is experiencing a growing rise in the activities of mercenaries and the development of suspicious relations between the separatists and several terrorist organisations, which threatens regional security as a whole and destabilizes Europe’s southern borders. He noted that this situation requires greater cooperation and coordination among all the parties involved, including European allies and partners. Regarding bilateral parliamentary cooperation, the Moroccan official underscored the importance of the action of the Moroccan-Polish friendship and cooperation groups within the House of Advisors and the Senate, as it is a parliamentary mechanism which plays a pioneering role in supporting the growing dynamism of bilateral relations in all sectors. Friendship groups also play an important role in increasing mutual visits and sharing experiences and good practices, particularly in areas of interest to both countries, including the development of economic and trade cooperation and solving problems related to immigration, terrorism and organized crime. Mr. Mayara also stressed the strong political will of the two countries to develop their economic relations, noting in this regard the large number of bilateral agreements and the volume of trade this year which exceeds one billion dollars, the statement said. According to the same source, the two sides hailed, during this meeting, the strength and vitality of bilateral relations which benefit from special attention from His Majesty the King and the Polish President, given the basic principles that bring the two countries together with regard to respect for human rights, the consolidation of the values ​​of peace and tolerance within the international community, respect for sovereignty and non-interference in internal affairs of States.