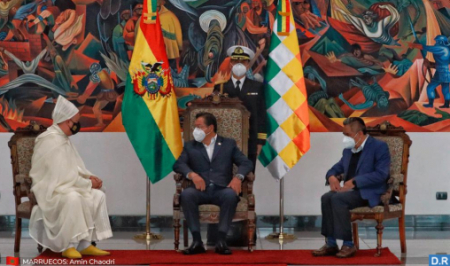 Bolivian President Luis Alberto Arce Catacora on Monday received Amin Chaoudri, who handed over his credentials as Ambassador Extraordinary and Plenipotentiary of His Majesty the King, with residence in Peru’s Lima. During this audience, which took place in the presence of Bolivian Foreign Minister Rogelio Mayta, the Bolivian President instructed the Moroccan diplomat to convey his marks of esteem and consideration to HM King Mohammed VI. On this occasion, President Arce Catacora expressed his willingness to further strengthen the ties of friendship and cooperation with the Kingdom and to give a new impetus to bilateral relations, highlighting the achievements and progress recorded by the Kingdom in various fields. For his part, the Moroccan diplomat conveyed the Moroccan government’s desire to raise relations between the two countries to the level of the aspirations of both peoples in all areas, through an active and supportive South-South cooperation.