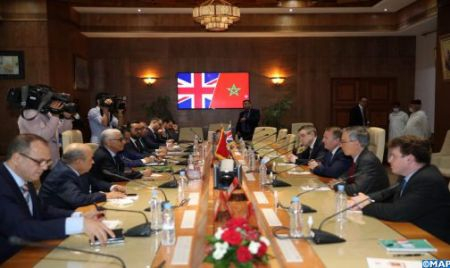 Speaker of the House of Representatives, Rachid Talbi Alami, held talks on Wednesday in Rabat with a British parliamentary delegation, led by Liam Fox, Chairman of the UK Abraham Accords Group, on a visit to Morocco from 1 to 3 June. The talks between the two parties focused on ways to consolidate parliamentary cooperation between the two countries through the institutionalization of bilateral and multilateral relations, via the parliamentary friendship group, sustainable communication, reflection on platforms for dialogue, as well as through the exchange and sharing of experiences and expertise, said a statement by the lower house. During these talks, Talbi Alami welcomed the excellent relations between the two kingdoms, as well as the fruitful cooperation between the Moroccan Parliament and the House of Commons of the United Kingdom. He also informed the British delegation of the political and institutional dynamics that Morocco is experiencing, a dynamic that has led to the organization of parliamentary elections in September 2021, marked by a high turnout. For his part, Fox stressed that this visit aims to explore all opportunities to strengthen parliamentary cooperation relations between Morocco and the United Kingdom, welcoming the efforts made by the Kingdom to ensure security and stability at the international level. Morocco has always opted for a peaceful approach to conflict resolution, which has enabled it to play a pioneering role in several regional and international issues, he added.