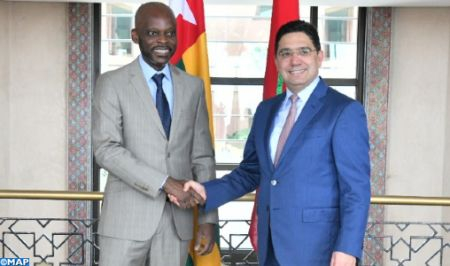 The Minister of Foreign Affairs, African Cooperation and Moroccans abroad, Nasser Bourita, and the Togolese Minister of Foreign Affairs, African Integration and Togolese Abroad, Robert Dussey, reaffirmed, Tuesday in Rabat, their firm resolve to further strengthen relations between the two countries and diversify bilateral cooperation in the various promoting sectors. Bourita and Dussey stressed, at a joint press briefing following their talks on the sidelines of the first Ministerial Meeting of Atlantic African States, the need to strengthen the ambitious cooperation between the two countries through a partnership encompassing areas of common interest and based on the exchange of expertise and on a more proactive policy of businessmen of both countries. At the economic level, they noted that the volume of trade falls short with regard to the excellent political relations and called for further boosting them with Moroccan imports consisting of mineral fuels, coffee, cotton, and tropical fruits, among others, and with exports of fertilizers, foodstuffs, paper, and electrical cables. In terms of investment, the two ministers welcomed Morocco’s presence in Togo through investments in the banking sector with the establishment of subsidiaries of Attijariwafabank, Banque Populaire, and Bank of Africa. To this end, the two parties decided to multiply the missions of businessmen to prospect other opportunities for trade and investment and to create a Morocco-Togo Business Council. Morocco is hosting on June 8 in Rabat the first ministerial meeting of African Atlantic States, which will bring together 21 countries of the Atlantic coast, including about fifteen represented at the ministerial level. This event will be an opportunity to develop a common African vision on this vital space, to promote an African Atlantic identity and defend with one voice the strategic interests of the Continent.