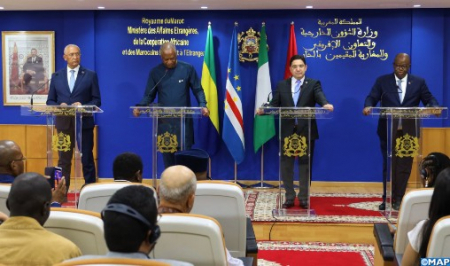 The Atlantic is not only a geographical area, but also a geostrategic space of common identity, said Minister of Foreign Affairs, African Cooperation, and Moroccans abroad, Nasser Bourita, Wednesday in Rabat. Atlantic Africa, which has immense potential that should be put to good use, faces major challenges that require the pooling of efforts, Bourita stated at a joint press briefing with his Nigerian, Capverdian, and Gabonese counterparts, namely Geoffrey Onyeama, Rui Alberto De Figueiredo Soares and Michael Moussa-Adamo, following the 1st Ministerial Meeting of the Atlantic African States. This ministerial meeting is held as part of HM the King’s vision for South-South cooperation and the attention that the Sovereign attaches to the Atlantic Ocean as a space for cooperation between African countries, Bourita said. Welcoming the “success” of this ministerial meeting and the tangible results achieved, Morocco’s FM noted that the level of participation illustrates the relevance of this initiative, driven by HM King Mohammed VI and stemming from the interest given by African countries to coordination and consultation within this important geostrategic space. “It is, therefore, necessary that African countries take the initiative to work together to restructure this space,” he argued, adding that the Atlantic North is structured while it is not the case in the Atlantic South. According to Bourita, this meeting aims to reflect on how to structure cooperation and to develop a common vision while providing appropriate responses to the challenges and opportunities of this space, which accounts for 46% of the African population, 55% of the African domestic product, and 57% of African trade. He also announced the decision to work within 3 groups dedicated to political and security issues, the blue economy, and the environment, in addition to the reactivation of a permanent General Secretariat that will be based in Rabat and will be in charge of coordinating ministerial meetings. Bourita also announced the creation of national liaison points to turn the Atlantic Ocean into a space for action for all ministerial departments and national stakeholders. For his part, Nigeria’s FM stressed that this meeting was an opportunity to formalize efforts to promote this vital space and preserve its potential to serve the interests of the Atlantic African States and their prosperity. Onyeama mentioned the issues of terrorism, organized and cross-border crime, piracy, human, drugs, and weapon trafficking as well as disputes over maritime borders. In similar remarks, Cap Verde’s FM De Figueiredo Soares tackled the issue of blue economy and connectivity, urging the Atlantic African States to give paramount importance to maritime scientific research. He also deplored the fragility of island countries within this geographical space in light of the risks caused by climate change while noting the close and complex connection between geostrategic issues in the world. As for Gabon’s FM Moussa-Adamo, he said this first ministerial meeting of the Atlantic African States was an opportunity to highlight the urgency of strengthening South-South cooperation, welcoming the commitment of HM King Mohammed VI to the reactivation of this geostrategic space. Referring to the issue of environment and energy, the Gabonese official called for the reactivation of African mechanisms in the field of renewable energy in the region to promote energy self-sufficiency and diversify energy sources.