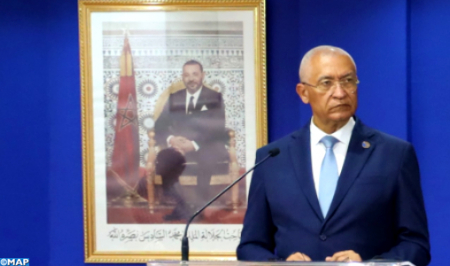 Cape Verdean Minister of Foreign Affairs, Cooperation and Regional Integration, Rui Alberto De Figueiredo Soares, reiterated, Wednesday in Rabat, his country’s support for the territorial integrity of Morocco and for the Autonomy Plan presented by the Kingdom, which constitutes “the only credible and realistic solution for the settlement of the dispute over the Sahara issue”. In a joint statement issued following his talks with the Minister of Foreign Affairs, African Cooperation and Moroccans Abroad, Nasser Bourita, on the sidelines of the 1st Ministerial Meeting of the African Atlantic States, the Cape Verdean top diplomat reaffirmed his country’s support for the territorial integrity of the Kingdom of Morocco, while welcoming the efforts of the United Nations as the exclusive framework for achieving a realistic, practical and lasting solution to the dispute over the Sahara. Mr. De Figueiredo Soares also expressed his country’s support for the search for a lasting solution that would preserve the territorial integrity of the Kingdom of Morocco, under the exclusive auspices of the United Nations and in accordance with Decision 693 of the Summit of Heads of State and Government of the African Union of July 2018. The Cape Verdean Minister also announced the upcoming opening of a resident Embassy of the Republic of Cape Verde in Rabat and a Consulate General in the city of Dakhla. Mr. Bourita, who welcomed this decision, thanked the Cape Verdean side for its support for the Moroccanness of the Sahara and recalled the commendable participation of the Republic of Cape Verde, at the level of its Ambassador in Dakar, at the African Ministerial Conference on the support of the African Union to the United Nations’ Political Process on the Sahara regional dispute, held in Marrakech, on March 25, 2019.