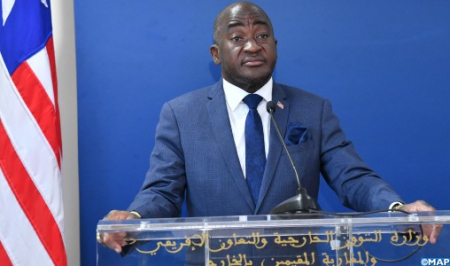 Liberia’s Foreign Minister, Dee-Maxwell Saah Kemayah, reiterated, on Thursday in Rabat, his country’s support for Morocco’s territorial integrity and the autonomy plan as the only solution to the Sahara issue. “Liberia’s position has not changed. Liberia continues to support the autonomy plan presented by Morocco to definitively settle the Sahara issue,” Kemayah told reporters following his talks with the Minister of Foreign Affairs, African Cooperation and Moroccans Abroad, Nasser Bourita, on the sidelines of the 1st ministerial meeting of African Atlantic States, held Wednesday in Rabat. “Liberia is a country that maintains its position. Our support for the territorial integrity of Morocco is unwavering. We are pleased to inform His Majesty the King, the government and the people of the Kingdom of Morocco,” he said. “Our country supports the Moroccan autonomy plan and will continue to defend it and promote it,” he pointed out. Mr. Kemayah stressed in this regard that Liberia reaffirms its unwavering support for the Moroccan autonomy plan backed by the United Nations for the settlement of the Sahara issue, as well as its support for the territorial integrity of Morocco and the initiatives of the United Nations to settle this regional dispute. The Liberian top diplomat underlined that his country welcomes the efforts undertaken within the exclusive framework of the United Nations to achieve a political, realistic, practical and lasting solution to this regional dispute. He said Liberia’s foreign policy is guided by “our entrenched belief in respect for national security, sovereignty of nations and non-interference in the internal affairs of any country.” “This is fundamental in our foreign policy,” he stressed.