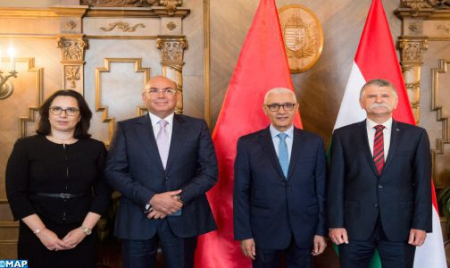 House of Representatives Speaker Rachid Talbi El Alami held, on Friday in Budapest, talks with the Hungarian Minister of Foreign Affairs and Foreign Trade, Péter Szijjártó. During this meeting, held on the second day of the Moroccan official’s working visit in Hungary, the two officials were pleased with the quality of relations between Morocco and Hungary, said a statement from the Chamber. “The strategic priority that Morocco gives to the fight against international terrorism is in perfect adequacy with the responsibility that falls to Budapest in the center of Europe,” noted the head of the Hungarian diplomacy. The two countries are united in their commitment to their sovereignty, said Szijjiártó, reiterating the support of his country to the territorial integrity of the Kingdom. For his part, Mr. Talbi El Alami welcomed the valuable support of Hungary to Morocco and its national cause, according to the same source. At the end of this meeting, which was attended by the chairman of the group RNI in the House of Representatives, Mohamed Ghayate and the Moroccan Ambassador to Hungary, Karima Kabbaj, the Hungarian official highlighted the exemplary vaccine policies implemented by the two countries in the face of the health crisis, concludes the release.