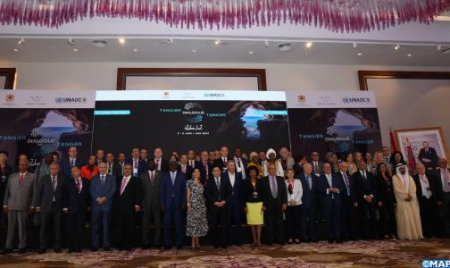 The Tangier Dialogue, organized by Project Aladdin, in partnership with the Ministry of Foreign Affairs, African Cooperation and Moroccans Abroad and the United Nations Alliance of Civilizations (UNAOC), was launched Friday in Tangier, to build bridges of understanding between cultures and civilizations of the world. Participants in the Tangier Dialogue stressed that this initiative is a space where world leaders engage in an open dialogue to define the parameters of a future based on the values of alliance, human solidarity, coexistence and mutual respect between civilizations and peoples. In this spirit, the Minister of Foreign Affairs, African Cooperation and Moroccans Abroad, Nasser Bourita, said that these exchanges are essential, because the world still needs free, dispassionate out-of-the-box and out-of-the-block thinking, an uninhibited approach to complex issues, and intellectual tolerance and diversity of perspectives. Bourita also noted that the Tangier Dialogue can mark its uniqueness and make a difference, transcending brainstorming to an active ownership of the issues discussed, as well as perpetuating and expanding the reflection, stressing that this international meeting “must remain creative, never redundant, daring, never following.” For his part, the Advisor to His Majesty the King, André Azoulay, assured that “Morocco is a crossroads of civilizations and a model of coexistence and convergence of cultures and religions. “You are gathered today in Tangier, as Morocco has found the way and reach this consensus, which is that of a nation and a society, in the land of Islam in the Arab world, which says modernity,” noted Azoulay. In a video message broadcast at the event, the UN Secretary General, Antonio Guterres, hailed the city of Tangier as a land of cultural pluralism, civilization and knowledge, and an ideal place to discuss relations and common problems of peoples. The world faces many challenges and problems that require international cooperation and solidarity, as well as multilateral dialogue, since “policies based on violence, hatred and intolerance have disastrous consequences,” insisted the UN SG, adding that well-being can only be achieved through cultural and religious diversity. On the other hand, the High Representative of the United Nations Alliance of Civilizations, Miguel Ángel Moratinos, noted that UNCOA accompanies the Project Aladdin and the Moroccan Ministry of Foreign Affairs in “the new adventure” of launching the Tangier Dialogue, knowing that dialogue is the basis of global understanding and diplomatic action. Moratinos also said that the Alliance of Civilizations seeks to contribute to the identification of a new architecture for peace, security and respect in the world, adding that UNCOA can serve as a bridge for dialogue and understanding between cultures and civilizations. “The world we seek to build must include mechanisms of regional solidarity based on noble human values.” As for Project Aladdin President Leah Pisar, she praised the efforts of His Majesty King Mohammed VI in promoting dialogue, rapprochement and mutual respect between cultures, calling to combat the roots and manifestations of hatred and violence that affect the world today. She also called for open dialogue, listening and mutual respect between the different parties and to open a new path towards a bright future. In turn, the Chairperson of the African Union Commission, Moussa Faki Mahamat, said that the world has never been faced, since the Second World War, with a climate of apprehension and multiple threats as it is today, due to wars, pandemic and the growth of terrorism, emphasizing the need to “share the lights of justice, equality and solidarity” to get out of this situation. He noted that Africa, despite the few hotbeds of tension and the deficit of economic governance and democracy in some of its regions, embodies the image of a respected and essential player in the global economy in the construction of bridges of rapprochement of civilizations and cultures, while stressing the imperative to weave effective and credible partnerships that leave each country the freedom to choose its partners. For his part, the former head of the Spanish government, José Luis Rodríguez Zapatero, said that progress in the world “will be achieved only if it is global and universal, because we are facing challenges and crises that impact the whole world,” explaining that the COVID-19 pandemic has taught the world two things, namely the value of scientific knowledge and the importance of cooperation, which has become “an inescapable necessity. While referring to several indicators of geostrategic changes in the world, Zapatero called for the imperative of developing a new global pact based on collective action for security and peace, and the presence of a leadership that also ensures the representation of Africa, Europe, Asia and Latin America. On the same line, the former Secretary General of the Arab League, Amr Moussa, noted that “we are reformulating the international mechanisms”, considering it necessary to work together to achieve a multilateral system that guarantees the interests of all countries, in order to ensure global peace and stability. For his part, the Chairman of the Committee on Defense, Foreign Affairs and Interior in the Federal National Council of the United Arab Emirates, Ali Rashid Al Nuaimi, expressed his thanks to Morocco for hosting the “Tangier Dialogue”, which takes place at a time when the world is facing many crises and conflicts. This meeting, marked by the participation of high-level personalities, embodies “the strongest points of peace, mixing of civilizations, and values of coexistence and tolerance to build a peaceful world,” he added. During this international event, participants discuss mainly ways to build peace through culture, the importance of economic factors in the dynamics of relations between the West and the Islamic world, and issues related to new technologies and climate change in Africa and the Middle East, as well as the prospects, in the short and medium term, in the Middle East and North Africa.