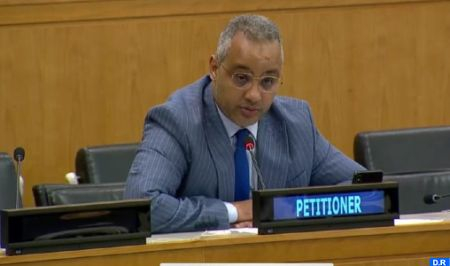 Vice president of the Laayoune-Sakia El Hamra Region, M’hamed Abba highlighted, Monday in New York, the international momentum of support for the autonomy plan presented by Morocco to close the dispute over the Sahara. “The issue of the Moroccan Sahara lives at the pace of a positive development both at the UN level and on the ground to achieve a realistic, pragmatic and sustainable political solution based on compromise,” said Abba at a meeting of the Committee of 24 of the UN. Several countries including Spain have provided “clear and unambiguous” support to the Moroccan autonomy plan, he said, recalling the opening of a large number of consulates in the cities of Laayoune and Dakhla, which clearly attests, according to him, the Moroccanness of the Sahara. Referring to the UN political process, Abba noted that the latest resolution 2602 of the Security Council reaffirmed, for the fourth consecutive time, that the roundtables remain the only framework to achieve a political solution to the regional dispute over the Moroccan Sahara. For the Security Council, the roundtable process, with its four participants, Morocco, Algeria, Mauritania and the “polisario”, has no other objective than to achieve a realistic, pragmatic and lasting political solution based on compromise, he said, noting that the definition of the parameters of the political solution is supported by the pre-eminence of the autonomy plan, again welcomed by the international community as “serious and credible”. He also lauded the revival of the political process under the exclusive auspices of the United Nations since the first tour of the Personal Envoy of the UN SG, Staffan de Mistura in the region, while calling for the holding, without delay, of the third round table in the same format and with the same participants: Morocco, Algeria, Mauritania and the “polisario”. The vice-president of the Laayoune-Sakia El Hamra Region highlighted, moreover, the massive participation of the population of the Moroccan Sahara in the legislative, communal and local elections of last September, which recorded the highest turnout at the national level (66%). This collective support confirms the commitment of the inhabitants of the southern provinces to the territorial integrity of the Kingdom and the implementation of the new development model in the region, he said. Addressing the new development model for the southern provinces, launched by His Majesty King Mohammed VI in 2015, the vice president of the Laâyoune-Sakia El Hamra Region noted that this virtuous model, worth more than 8.8 billion dollars, aims to make the region a leading national, continental and international economic hub and a gateway to Africa. Regarding the human rights situation in the Tindouf camps, Abba said that the detained populations have no right to leave these camps of shame in southwestern Algeria to join their brothers and sisters in the Moroccan Sahara, build a better future and contribute to the development of the southern provinces. He said that the latest report of the UN SG issued in October 2021 and resolution 2602 have recalled once again the catastrophic humanitarian situation prevailing in the camps of Tindouf where the host country has abandoned its international responsibilities towards this population to the benefit of an armed separatist group, in clear violation of the rules of international humanitarian law. Pointing out that the regional dispute over the Moroccan Sahara is the residue of cold war logics maintained by other parties, he said that the Sahrawis are firmly committed to the democratic opportunities offered by the autonomy plan and reject the lies and untruths spread by the “polisario”. “Even the leaders of this armed separatist group no longer believe in the chimera of separatism,” he said.