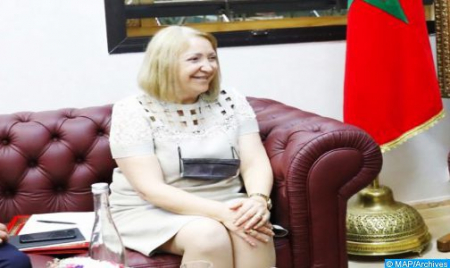 Latin American and Caribbean Parliament (PARLATINO) Speaker Silvia del Rosario Giacoppo stressed, Wednesday in Rabat, the need to strengthen joint action to give substance to the South-South cooperation. Speaking to the press after her talks with the Minister of Foreign Affairs, African Cooperation and Moroccans Abroad, Nasser Bourita, Giacoppo stressed the importance of consolidating the alliance that exists between PARLATINO and the Moroccan parliament, within the framework of the Afro-Latin American Parliamentary Forum “AFROLAC”. The Speaker of PARLATINO, who is currently on a working visit to Morocco, added that this parliamentary alliance has existed between Africa and Latin America for several years, noting, however, that “the approach to South-South cooperation, conceived decades ago, has not yet been implemented as required.” During this visit, the General Secretariat will be installed, which will embody this cooperation in terms of legislation and joint action of the two parliaments, she said, stating a stronger commitment to continue the action in the service of the unity of the two continents that have many things in common. Giacoppo welcomed, in this regard, the commitment of Africa and Latin America to work together to combat climate change and promote peace and food security, calling for greater action to address issues of common interest and achieve the aspirations of both continents. PARLATINO, of which the Moroccan Parliament is an observer member, includes more than 20 parliaments representing the countries of the region. It is linked by cooperation agreements with several bodies and international organizations. After this meeting, Bourita held talks with the Cape Verdean Minister of Communities, Jorge Pedro Mauricio dos Santos, on several issues of common interest. Mauricio dos Santos had received, Monday in Rabat on the occasion of the holding of the second edition of the Conference of African Jewry, the “Jewish leadership awards” which rewards personalities who have worked for the preservation of the African-Jewish culture.